Why Is Taiwan So Disputed? 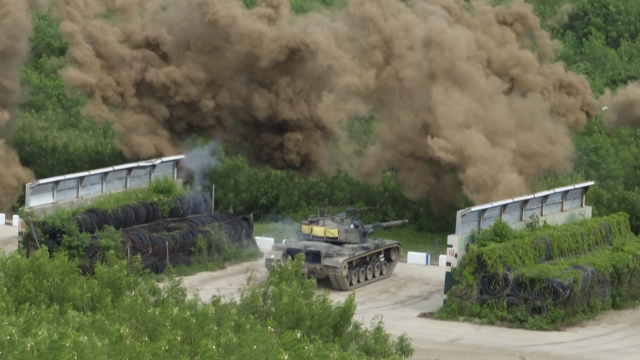 There are still tensions over diplomatic relations between Taiwan and the U.S.

How did Taiwan become one of the most contested places on the planet?

The story begins in 1949. A civil war pitted Chinese nationalists and communists fighting in a civil war.

The communists won on the mainland in 1949. The nationalists, led by Chiang Kai-Shek, fled to Taiwan, 100 miles off the southeast coast.

For decades nations maintained relations with both governments.

That was until 1979 when the U.S. established diplomatic relations with the PRC on the mainland and broke official ties with the ROC in Taiwan.

Beijing has said for decades that Taiwan is part of what it calls "One China."

Since 1982, the U.S. has maintained a delicate balance on the issue. On one hand, American administrations have recognized China's position but crucially, the U.S. hasn't endorsed it.

Instead, while calling for a peaceful resolution of the conflict, the U.S. has been an unofficial military partner of Taiwan for decades. During the Trump and Biden administrations alone, the U.S. sold roughly $20 billion in arms to Taiwan, according to the Arms Control Association.

China accuses the U.S. of encouraging the island's independence through the sale of weapons and engagement between U.S. and Taiwanese politicians.

Historically, the U.S. hasn't said it would defend Taiwan from a Chinese invasion.

But this tenuous balance is at risk of being upended.

President Joe Biden has repeatedly made assurances that the U.S. would in fact defend Taiwan.

REPORTER: Are you willing to get involved militarily to defend Taiwan if it comes to that?

BIDEN: That's the commitment we made.

White House officials backtracked, but House Speaker Nancy Pelosi further ratcheted the tension in August when she visited Taiwan, the highest profile American delegation on the island since 1997.

"Democrats and Republicans, House and Senate, both sides of the aisle united in our support for Taiwan," said Pelosi.

China responded with condemnation and kicked off a series of aggressive military drills.

The stakes of the confrontation have risen as the prospect of a Chinese invasion could far worsen an ongoing global shortage of semiconductors.

The Taiwan semiconductor manufacturing company makes 92% of the world's most sophisticated microchips according to the research firm Capital Economics.

Those chips are found in phones, laptops, cars and other electronics across the world.

So for now, one of the world's most contested territories will remain, Taiwan.