Why Is The Death Penalty Process Taking Longer? 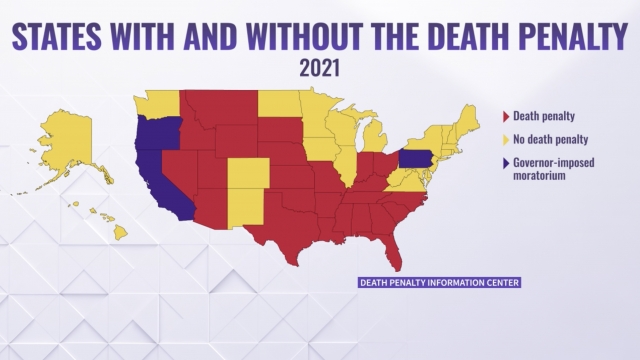 The Death Penalty Information Center found more than half of the executions over the last decade took 25 years or more to finalize.

Currently, 27 states and the U.S. territory American Samoa have capital punishment, and while some states have statutes where it can be used for convictions other than murder, it's almost used exclusively for those cases, and to ensure a lawful execution, each state has a process.

But said process can sometimes lead to a slowdown, leaving inmates waiting for years and even decades on death row, which brings new challenges.

Author Terry Robinson didn't discover his passion for writing until he was jailed and sentenced to death as a 30-year-old for a murder he says he didn’t commit.

After 20 years on death row, Robinson began sharing his stories with the world; understanding the reality of waiting for death. "Where there is rehabilitation, there's insight, you know, there's education in these stories. So, I hope people can start to read my stories and be forgiving, you know, be understanding," Robinson said.

The most recent data from the Justice Department shows while the number of executions and prisoners on death row is down, inmates are waiting longer. From sentencing to execution or exoneration, the average time on death row in 2020 was almost 19 years. 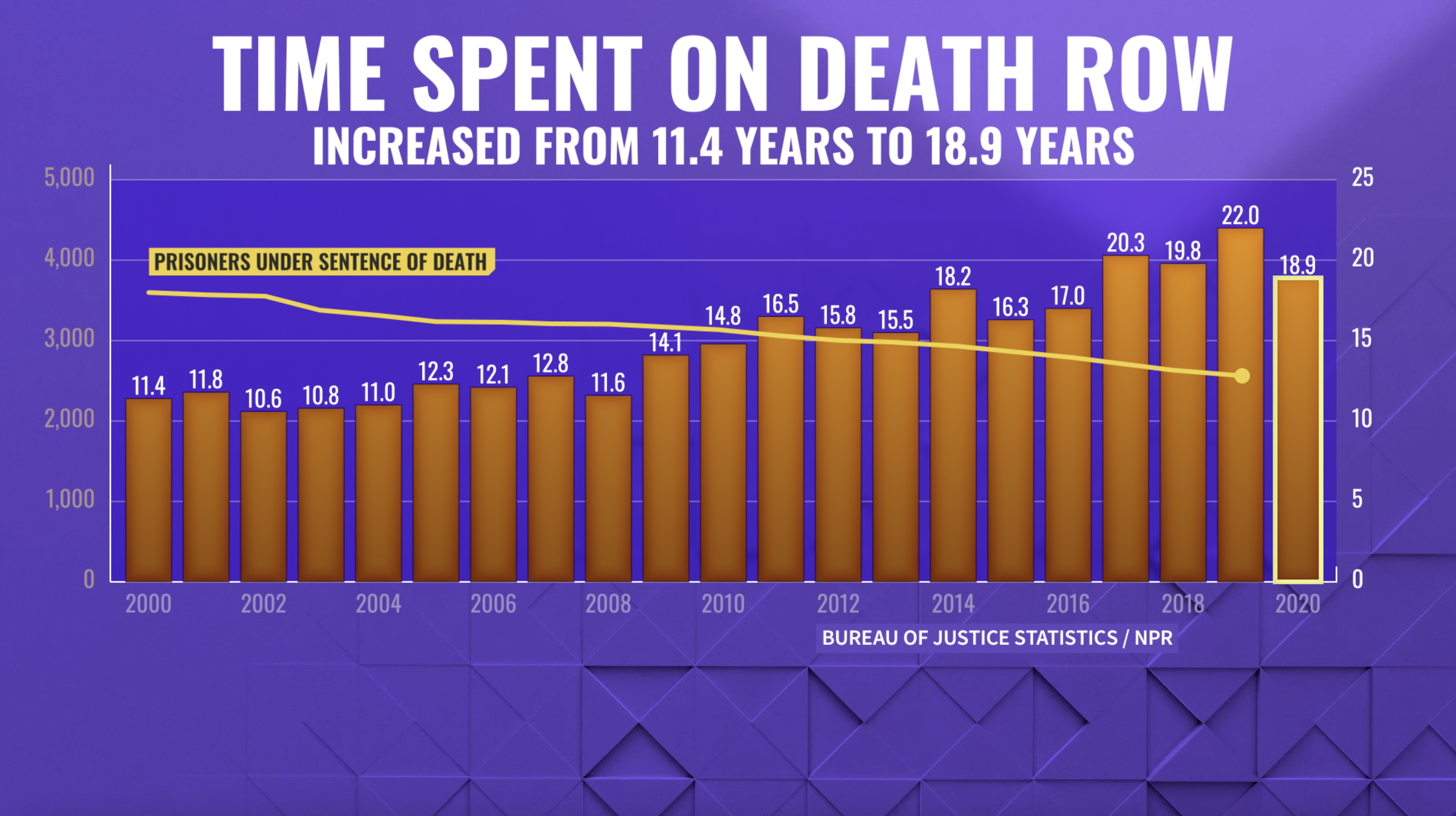 Author and staff writer for The Marshall Project Maurice Chammah says one of the biggest slow downs is the appeals process. "At each of those stages, you have lawyers coming on who are slowly picking apart everything that happened in the trial. And then they're also re-investigating the case to make sure evidence wasn't hidden from the defense, that the original defense lawyers did a good job," Chammah said.

Dissecting the case starts at the state level, progresses to the federal level, and returns to the state when new lawyers come in and investigate.

"They look and see, you know, who was this defense lawyer at the trial? Did the jury hear everything that they should have heard? And then did the prosecution play by the rules, too?" Chammah said.

Each stage can take anywhere from months to years to settle. And even when a state decides to sentence an inmate to death, Chammah says, it might not even have or want a pathway to follow through.

"They maybe have a moratorium or you just have, you know, political leaders, governors, prosecutors who don't really want to see executions through. And so they basically, on their own side, slow down the process as much as they can," Chammah said.

Another cause for delay involves drugs used for lethal injections. The U.S. started using injections in the late 1970s as a cheaper, more humane option, compared to methods like the electric chair. But to be clear, no drug is designed specifically for executions.

States instead use a cocktail of heavy anesthetics or a muscle relaxant and a drug to induce cardiac arrest or a mix of all three.

But by the 2010s, Chammah said, some pharmaceutical companies realized states used their drugs for executions and refused to sell to prison systems, prompting a shortage of these drugs.

"Then prison systems in states around the country had to start looking for other sources, and they often went under the table. They would pay in cash to sort of less reputable sources," Chammah said. 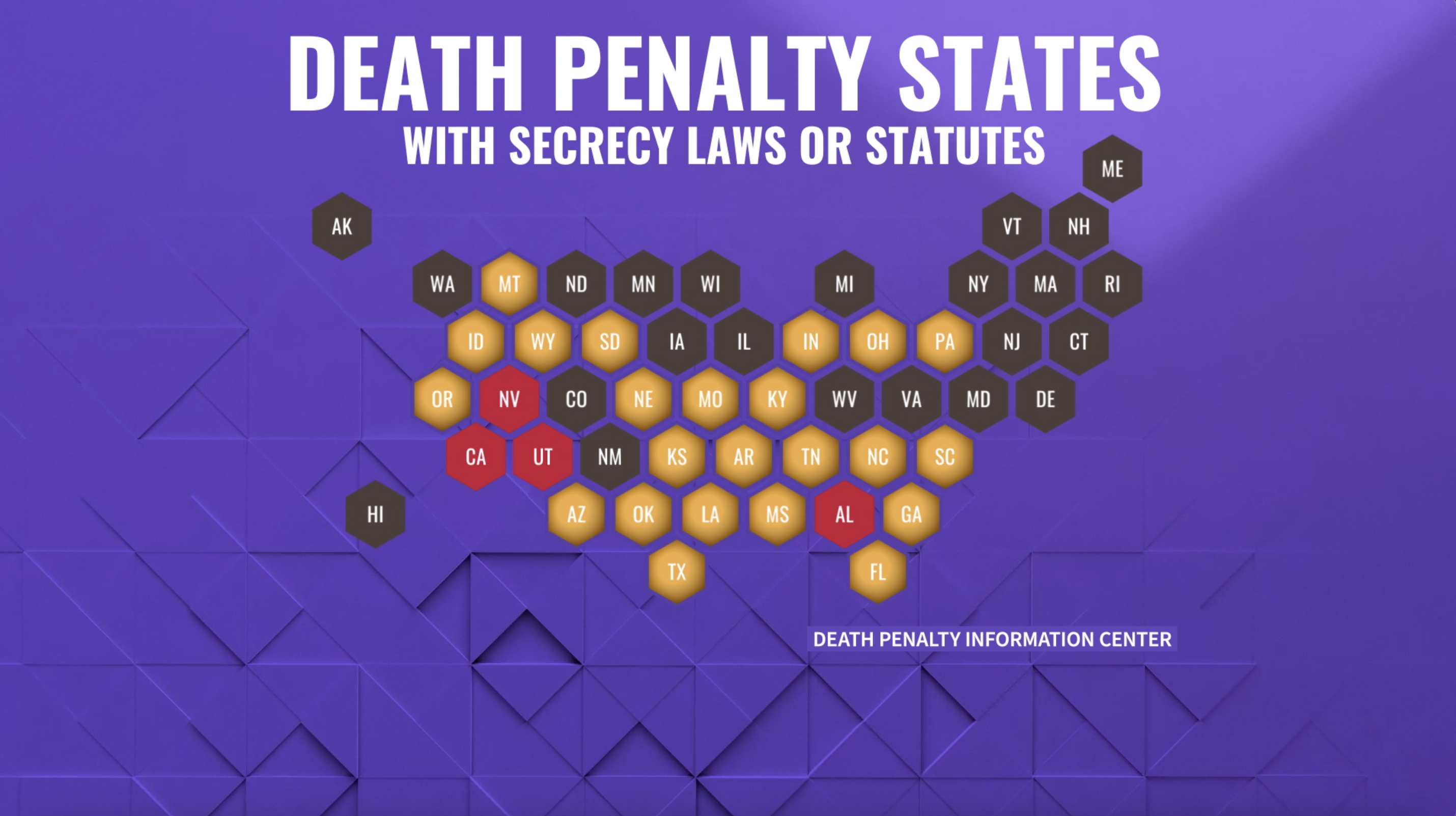 Sources like compounding pharmacies which combine, mix or alter drugs to fit a specific need and according to the Death Penalty Information Center, are largely unregulated by the FDA.

The delays have lasted so long, some states have forged ahead with untested drug combinations, sometimes ending with disastrous results.

In an attempt to build trust with manufacturers and alleviate shortages 23 out of the 27 death penalty states passed laws or statutes that keep the identity of drug suppliers a secret.

But critics of the laws argue blocking information about where drugs come from also blocks a prisoner’s right to be free from cruel and unusual punishment.

Meantime, while the courts volley cases back and forth and states search for drug supplies for lethal injection families of victims are left in limbo, waiting in agony for the execution to arrival; like Fernando Castro, who watched his father’s killer die by lethal injection, 15 years after his conviction.

"I feel like my dad got his justice but I'm not happy about the situation. It shouldn't have lasted this long. I think the system is far too slow," Castro said.

Chammah recognizes the wait can be grueling, with courts reversing cases two, three, or even six times. "Every single time the victim's family is going back into court. They're being re-exposed to all of the traumatic memories that they have from the original crime," Chammah said.

The wait can also be excruciating for death row inmates, with some raising questions about fair treatment as states and its taxpayers foot the bill for severe living conditions. 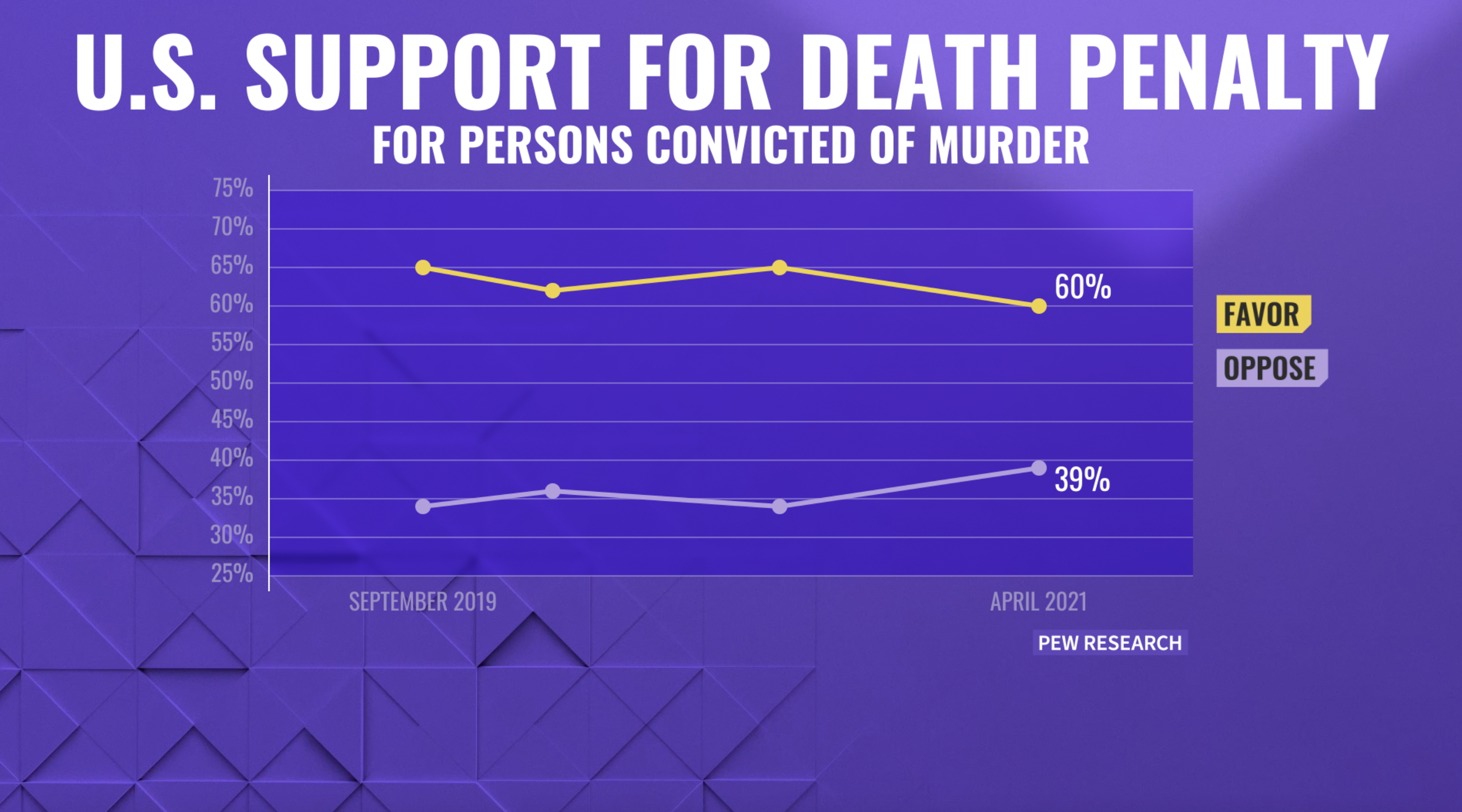 "People are living in near-total isolation, solitary confinement for, you know, upwards of 20 to 23 hours a day. They're not able to touch human beings other than guards," Chammah said.

Psychologists and lawyers have argued the restrictions may lead to what they call "death row syndrome" where prisoners may suffer from delusions, insanity and suicidal ideation.

"There is a group of inmates who say I would rather be executed than live the rest of my life in prison or on death row," Chammah said.

In California, where there is currently a moratorium on executions, the state says more death row inmates have died of suicide and natural causes than from executions since 1978.

Some people don’t want guilty prisoners to find reprieve through death like Dominique Douglas, who lost two loved ones in a mass shooting at a Buffalo grocery store. The shooter may face death penalty if he is convicted of federal hate crime charges.

"Justice doesn't look like a lethal injection. Justice to me means this person, this monster, this thug sitting in a prison, not confined but in an open population and every day, every minute, every second, every hour, accounting for all the horrendous things that he did," Douglas said.

But a majority of the U.S., 60%, support capital punishment, according to Pew Research.

As for speeding up the process, Chammah says evidence suggests it’s difficult to do without infringing on people’s rights. Like in the mid 1990s, when Congress passed laws aimed at quickening the death row appeals process.

Chamman says by imposing stricter deadlines and allowing states to shorten appeals, the law made it difficult for inmates to get their claims heard in court.

"It has measurably increased the rate of people with serious constitutional violations being executed and even people who are potentially innocent being executed," Chammah said.

At its core, both opponents and supporters of the death penalty agree the system isn’t working efficiently. But whether to mend the problems with new laws or end capital punishment completely is still a heated debate.