Why Is 'The Office' Still So Popular? We Asked The 'Office Ladies' 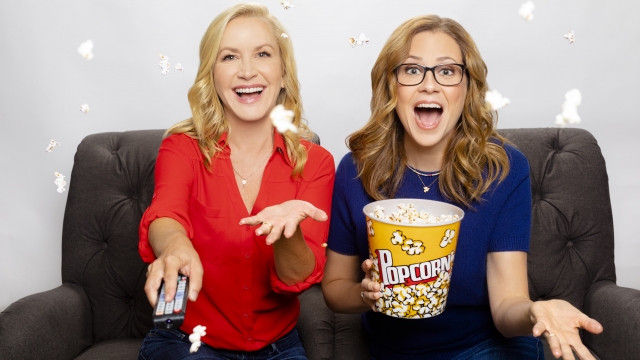 We talked to Angela Kinsey and Jenna Fischer (aka Pam and Angela) about streaming, Gen Z viewers and random encounters with fans.

"Yeah, I've been shopping and someone, their son was watching it on the cellphone, and he went like this. So it is kind of wild."

If you've ever seen "The Office," you'll recognize Angela Kinsey and Jenna Fischer as Dunder Mifflin employees Angela Martin and Pam Halpert. ["I'm having a child with my husband, The Senator, and Pam is having a child with Jim."]Almost 15 years after the series debuted, the two actresses are now the hosts of "Office Ladies," a podcast entirely dedicated to the sitcom.

"We're going to have cast and crew and writers and directors, and we're just going to go through every episode of the show and talk about our memories."

"The Office" ended more than six years ago — after winning five Emmys during its eight-year run. Today, it's as popular as ever.Last year, "The Office" was the most-viewed title on Netflix, and this year, the series made major headlines when NBCUniversal paid $500 million for its exclusive streaming rights.

"Do you think the show would have been as popular as it is today, without the ease of, as you said, binge watching and streaming?""I think streaming has been what has kept the show sort of in people's orbit.""It's kept us in your home or in your living room. People can watch it now because of streaming on their phone, on their iPad, on their computer. Appointment television, which is what we grew up with, which was like, 'Oh, every Thursday night, my family's going to gather around.' That is not what kids are doing anymore, and that's not what college kids are doing, and even working parents. You can have a night where you get to watch a bunch, or you just leave it going in the background, and I think it's made the show very current, and it just keeps finding new audiences because of it."

Those new audiences include younger, Gen Z viewers who likely weren't able to watch the series when it originally aired. Actor Timothée Chalamet said in a recent interview: "Netflix was how I watched 'The Office' ... I took pride in it." And singer Billie Eilish even sampled clips from the show in her song "my strange addiction." ["You should enter it in festivals or carnivals."]

"I was flying on a plane this summer with my family, and the seat next to me, there was a young girl — probably early in her early 20s. And she was watching 'The Office' on her laptop. And I sat down, and she didn't really sort of look over and register me, but I was watching me and Dwight in the break room being like, 'Hey.' And then I watched her look at her computer, and then look at me, and then look at her computer and then look back, and she goes, and I was like, 'Yes, yes.' And she was like, 'Oh my god.'"

The podcast "Office Ladies" is produced by Stitcher's comedy network Earwolf, and distributed by Stitcher itself. Both Stitcher and Newsy are owned by E.W. Scripps.