Why Is The Philippines A Natural Disaster Hot Spot? 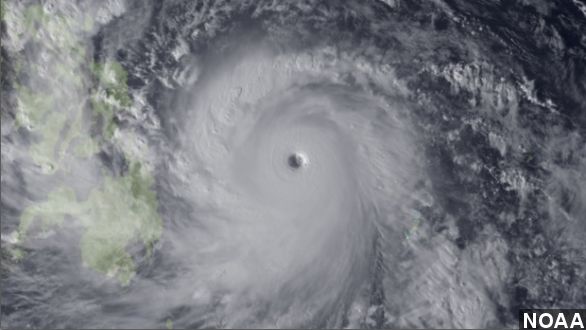 Super typhoon Haiyan is the fourth typhoon to hit the Philippines in 2013, according to a Weather Underground meteorologist.

Thousands are feared to be dead after super typhoon Haiyan tore through the Philippines this weekend.

"The International Red Cross estimates typhoon Haiyan has left more than 1,000 people dead. Communications are difficult and humanitarian relief crews are only slowly making their way into the hardest hit areas." (Via NBC)

The country has a storm-ridden track record. Masters says since the 1970's, "the Philippines has been hit by more tropical cyclones than any country on earth except for china." (Via USA Today)

The World Bank also calls the Philippines one of the most disaster-prone countries in the world. It says tropical cyclone activity has been on the upswing in recent decades and is "likely to continue under a future climate."

The country’s unique location along the Pacific Ocean's disaster prone region known as the Ring of Fire presents a double threat.

The Wall Street Journal says the "nation’s location in the tropics exposes it to multiple natural hazards including typhoons, floods and drought." But it faces earthquakes and volcanic activity because of the Ring of Fire.

Haiyan reportedly reached winds stronger than 200 mph, which is above the highest category 5 storm classification. (Via CNN)

The typhoon is expected to hit Vietnam and Loas toward the end of the weekend.