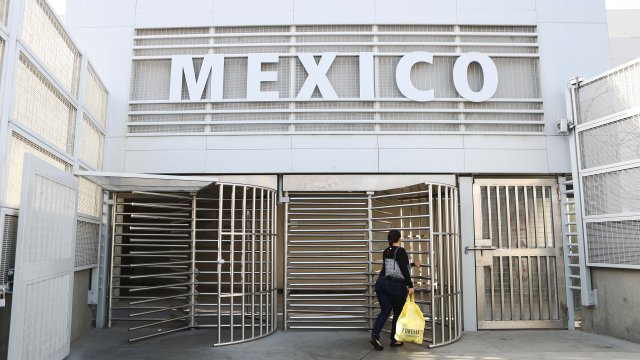 The U.S. has sent more than 100 asylum-seekers to Mexico to ensure that they don't "disappear into the United States." But critics say it's unlawful.

The U.S. has returned at least 112 asylum-seekers to Mexico, where they're expected to stay for months or even years until their cases are decided.

That's the result of a controversial government policy informally known as "Remain in Mexico." It was launched in January, and it only applies to certain non-Mexican asylum-seekers at San Diego's border crossing, the nation's busiest.

Because of space limitations in detention centers, many asylum-seekers have historically been allowed to live in the U.S. under electronic supervision while they wait for their immigration hearings.

But President Trump strongly opposes the practice, which he calls "catch and release."

That's why when Homeland Security Secretary Kirstjen Nielsen introduced the policy, she wrote that asylum-seekers "will no longer be able to disappear into the United States, where many skip their court dates." And, in a nod to her boss, she said, "'Catch and release' will be replaced with 'catch and return.'"

To put Nielsen's claim into perspective: Justice Department data shows in 2017, 89 percent of asylum-seekers showed up for their hearings.

But the "Remain in Mexico" policy is controversial for other reasons.

In a lawsuit against the government, human rights groups argue that making asylum-seekers wait in Mexico violates U.S. and international law. That's because, the groups allege, border officers are ignoring the migrants' "real fears of return to Mexico."

The lawsuit, which was filed on behalf of 11 migrants who were bused back to Mexico, says several plaintiffs have already been attacked there.

The lawsuit also claims that being in Mexico "makes if difficult if not impossible" for the migrants to prepare for their asylum cases. That's partly because U.S. immigration lawyers say the logistics of representing asylum-seekers who are in Mexico will be challenging.

A Justice Department spokesperson said the administration's policy is lawful and that it plans to defend it in court.

The White House has said it wants to expand the program to other border crossings. But Mexican officials say "there's a limit" to how many returnees the country can accommodate.