Why (And How) Is WikiLeaks Helping Donald Trump? 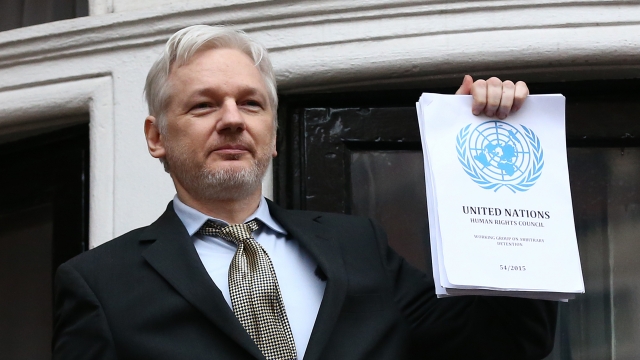 Julian Assange has it out for Hillary Clinton, and he's getting a lot of love from team Trump because of it.

WikiLeaks is facing a new accusation that it's a tool of the Russian government. Here's what we know.

We know the Democratic National Committee was hacked.

"It could be Russia, but it could also be China," Donald Trump said. "It could be lots of people. It could be somebody sitting on their bed that weighs 400 pounds, OK?"

It could be someone who weighs 400 pounds. But U.S. cybersecurity experts are pretty certain it was hackers working for Vladimir Putin's government who stole files from the DNC.

"Whenever you're an attacker, you have an MO, you have tools," said Nicholas Weaver from the International Computer Science Institute, Berkeley. "Often you can deduce the programmer’s language. It all seems to point to a known set of Russian actors."

After past leaks damaged U.S. diplomacy efforts, Clinton's State Department vowed to hold Assange responsible. Today, he's not hiding his contempt for her.

And Assange is earning some love from Trump's team in the process.

"You have done a lot of good in what you have exposed in how corrupt, phony, and dishonest our government is, and I applaud that," Sean Hannity said.

"We have already released thousands of cables by Hillary Clinton," Julian Assange said. "Here she is, 'Clinton' — that's her signature."

Thousands of documents to hurt Clinton, but nothing on Trump. And Assange's apparent Russian sources have reason to want Trump in the White House.

"If we believe in everything Trump says about NATO, about defending United States Allies, that would contribute to Russian interests as well so they have many interests to support this guy and consider him a Russian candidate in America," said Marius Laurinavicius from the Kleptocracy Initiative.

It's not just the DNC. Russia has been accused of hacking the State Department, White House and Joint Chiefs of Staff. Also hacked: media outlets like The New York Times and Washington think-tanks.

"I suspect they're chaos monkeys," Weaver said. "That you throw the election into chaos and that’s a benefit to the Russian government. One thing I worry about is this group targeting a county election system. And it doesn't even have to be successful. It just has to cause the belief that it may have been successful. And when you already have a candidate complaining that the election might be stolen from me — imagine if five percent of the voter registration disappeared? It would be catastrophically chaotic."

After briefings from U.S. intelligence agencies, top Democratic lawmakers reached the same conclusion, calling out Putin for trying to "influence the U.S. election."

SEE MORE: That Big WikiLeaks Release Is Coming — If You Believe This Tweet

So what has WikiLeaks revealed about Russia? Well, actually, they stand accused of covering something up for Russia.

Of course, WikiLeaks denies all these charges.

"Our materials, the materials that we release are pristine," Assange said on HBO. "We're really good at this. We have a 10-year perfect record. And we've never got it wrong in terms of the integrity of what we released."

But Assange also says his biggest leaks on Clinton are yet to come — something that will please both the Trump campaign and the international players trying to get him elected.