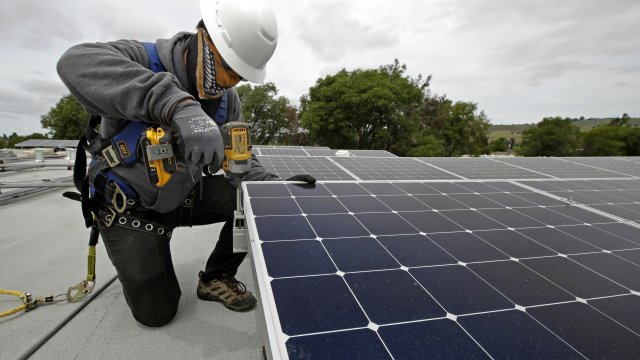 Averting the worst case scenarios for climate change is going to need a lot of solar power.

If you think about it, almost all energy on Earth comes from the sun.

The food that keeps you moving is grown via sunlight. Fossil fuels are chemicals that were once ancient plants, nurtured by the sun’s light. Even wind power comes from solar heating, which creates atmospheric circulation.

Solar energy is appealing because it eliminates the middleman, using the sun most efficiently.

And it’s not a new idea. In 1883, Charles Fritts created the first solid state photovoltaic, or PV. It was one percent efficient.

When President Jimmy Carter installed a solar water heating system on the White House roof in 1979, state of the art PV was about 16 percent efficient.

Engineers, meanwhile, have developed ways to put solar on almost anything.

Like farm equipment, parking lots to offer shade to cars, or floating panels that can reduce evaporation of reservoirs.

The cost of solar energy has plummeted by a whopping 80 per cent since 2010. But powering America with solar won’t be cheap.

And for the whole country?

Last year, Princeton scientists estimated that transitioning the entire U.S. to net-zero energy by 2050 would cost $28 trillion, in 2018 dollars. Solar would be a prime component.

That could amount to six percent of gross domestic product. As a percentage, that’s far less than we’ve spent on energy during major crises.