Newsy Investigates: What Led To The Shortage Of At-Home COVID Tests 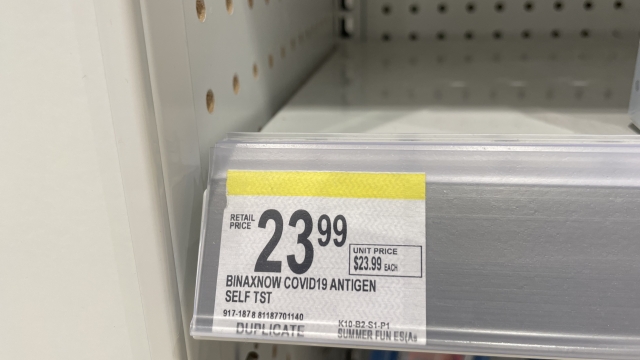 A focus on vaccines over routine testing for asymptomatic people helped tank the U.S. market for at-home rapid tests before the Delta variant struck.

President Biden's new strategy to end the pandemic includes a plan to surge production of at-home rapid tests, quickly selling out in stores and online.

The shortage is the result of the U.S. failing to develop a market for home tests big enough to handle the spike in demand brought on by concerns about the Delta variant of the disease and breakthrough infections among vaccinated people, a Newsy investigation has found.

“It’s like trying to buy toilet paper in the beginning of the pandemic,” said David Perry, who bought the last two packs of Abbott’s BinaxNOW tests at a Walgreens in North Oaks, Minn.

“It’s basically 50 dollars a round for the family,” Perry said. “That’s a price I’m happy to pay, but that does start to add up quickly.”

Testing by health care workers is still widely available in places including pharmacies, doctors offices and drive-through clinics, though appointments are more difficult to find in recent weeks. The shortage is affecting self-tests taken at home that offer results in minutes. CVS is limiting how many a customer can buy at once. Brands are back-ordered on Amazon.

That contrasts with other countries where plenty of self-tests remain available.

There are seven rapid tests at the ready each day for residents of the United Kingdom. Kindergartners in Israel each got a free home test before the first day of school. And David Peck sent a photo of a bin full of tests marked down at a German grocery store.

A box of five cost under four euro, less than a euro per test, affordable enough for Peck to screen himself daily from his home in Spain.

“It’s like brushing your teeth in the morning,” Peck said. “You do a COVID test, you brush your teeth, you comb your hair, eat breakfast and go.”

The U.S. never developed a strong market for over-the-counter COVID tests, though federal health officials have long said they are important.

“Rapid at-home tests that will allow us to get back to normal activities like work and school,” said Tim Manning, White House COVID-19 response team supply coordinator, during a media briefing Feb. 5.

“Right now with Delta is the first time you actually see any demand for these tests,” said Sara Citrenbaum, research specialist at rapidtests.org, an all-volunteer group group promoting rapid tests as a tool to fight the coronavirus. “Last year we couldn’t convince places for the life of us to actually utilize these tests.”

Other nations encouraged frequent COVID screening, including for those without symptoms, and flooded their markets by purchasing billions of home kits, keeping prices low.

U.S. public health messaging focused on getting vaccinated, less on testing. Demand for at-homes dipped further in spring after the CDC said fully vaccinated people didn’t need testing unless exposed to someone suspected or confirmed to have COVID-19.

“The U.S. never really bought into the idea of asymptomatic testing,” Citrenbaum said.

By May, with many Americans planning a return-to-normal summer, Abbott had a surplus of its 15-minute BinaxNOW tests.

The company began laying off employees and throwing away test components the company said had expired.

European countries were still buying self-tests, so when the Delta variant ballooned the infection rate, the screening kits were still as easy to find as a pregnancy test, and remain plentiful today.

Many of the big manufacturers selling overseas lack FDA authorization to offer tests here, so they can’t help fill the supply gap.

President Biden announced Thursday a plan to send millions of rapid tests to community centers and food banks for free.

Walmart, Amazon and Kroger have agreed to sell tests at-cost for the next three months, to bring prices down.

But manufacturers say it will take time to build supply.

In a statement, Abbott said: “We’re ramping back up … we’re hiring people and turning on parts of our manufacturing network that were idled or slowed…”

Test-maker Ellume says it has seen a 900 percent spike in demand just in the past month. The Australian company is building a factory in Frederick, Md., to triple production, but it won’t be online until the end of the year.

“Wouldn’t it be great if we could all just take this test,” Perry said, “and have it be no more complicated and expensive as, I don’t know, taking an allergy pill?”

That hope is already a reality outside the U.S.