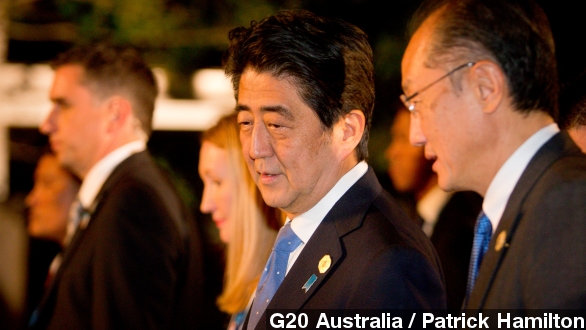 Japanese Prime Minister Shinzo Abe is doing all he can to hold onto power in the face of an unexpected recession, including calling an early election.

If Japan's slip into recession this week shocked Prime Minister Shinzo Abe as much as it did the rest of the world, he's done a good job of hiding it.

The prime minister has acted quickly in the wake of the economic constriction — postponing a sales tax planned for next year by at least 18 months and calling an election for mid-December. (Video via BBC)

That last move appears to have caused some confusion, seeing as the prime minister technically doesn't need to hold an election until 2016, the end of his four year term. (Video via Financial Times)

The Financial Times talked to some Japanese citizens who were a little perplexed by the move, with one person telling the Times, "It is our money. There must be better ways to spend it."

Analysts had speculated Abe might call an election, and they seem to be a little less confused about why.

KAORI ENJOJI, CNBC: "This is a move by the prime minister to solidify his power within his own party while his support ratings are high ... he's run into resistance from within his party."

Abe has already faced some political resistance to delaying the proposed tax hike, so the added mandate of an election victory could help him push that through as well. (Video via NHK World)

Still, the election presents something of a risk, as Columbia University's Gerald Curtis told The Wall Street Journal, because elections in Japan have tended toward the unpredictable in the last decade.

GERALD CURTIS VIA THE WALL STREET JOURNAL: "Every election has had a wild swing ... I expect Abe will come out of this election weaker than he's going into it. We won't see a lot of rapid progress."

There's no question there's a lot at stake for Abe either. His agenda includes unpopular measures like restarting the country's nuclear power production, and that additional sales tax hike next year.  (Video via CBS)

Abe will dissolve parliament on Friday and elections will be held on December 14.