Why Most US Companies 'Failed' A Conflict Mineral Test 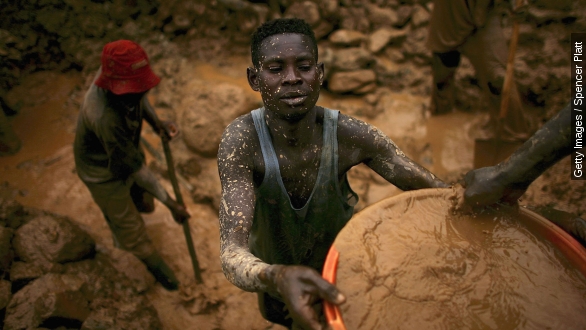 A new survey found that 80 percent of the U.S. companies it examined failed to verify the minerals used in their products aren't from conflict zones.

Four out of five U.S.-listed companies aren't doing enough to show the minerals they use don't come from conflict zones in Central Africa.

That's according to analysis from Amnesty International and Global Witness, which looked at reports from 100 companies.

2010's Dodd-Frank Act to reform Wall Street included a provision that said companies had to investigate the origins of some of the minerals they used and report them. (Video via C-SPAN)

That provision went into effect last year, and the results aren't great.

The biggest problem is companies not fulfilling all the reporting criteria of the Security and Exchange Commission and the Organization for Economic Cooperation and Development. (Video via International Business Times)

But one possible explanation for companies' lapses is the majority of their consumers don't seem to care all that much about where their technology comes from. (Video via ABC)

For example, suicides at Foxconn, the Chinese manufacturer that produced popular Apple and Sony products, attracted international attention in 2012. (Video via CBS)

But despite Apple investigations, the suicides continued, and a BBC report from last December found violations at Apple's manufacturers continued, too. (Video via BBC)

And that was during the production of the iPhones that helped Apple in January post the most profitable quarter ever for any company. (Video via Apple)

And that's consistent with one consulting group's analysis in 2012 that showed public outcry over conflict minerals doesn't really correlate with sales. (Video via KTLA)

Nevertheless, Apple has pledged to reduce its reliance on conflict minerals but not by finding suppliers outside of Congo. Instead, it says it wants to increase the number of verified suppliers on the ground, something other tech companies like Intel have supported as well. (Video via Intel)