Why Officer Darren Wilson Shouldn't Give A TV Interview 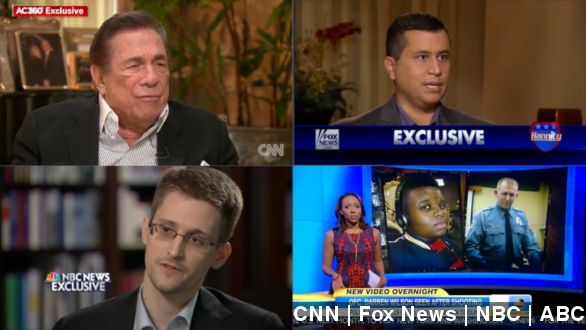 Ferguson police officer Darren Wilson has nearly disappeared from public view since the shooting. Would a TV interview help his image?

Tensions are high in Ferguson as residents await a grand jury decision on whether to indict police officer Darren Wilson in the shooting death of unarmed teen Michael Brown.

Wilson has been nearly impossible to find since the shooting, completely disappearing from public view. But now he's reportedly being courted by a handful of network news anchors looking for his side of the story.

Shortly after Stelter reported that information Sunday morning, Cooper and Lemon confirmed on Twitter that they'd met with Wilson, with Cooper saying Wilson declined an interview with him.

And is it really wise for the Ferguson police officer to make his first public statement via a national TV interview? Exclusive interviews with national TV networks don't always result in positive publicity for the subjects.

"I'm not a racist," Sterling said then.

Although Sterling might've thought the interview would help his public image, it didn't seem to do him any favors.

The same sort of backlash occurred after Fox News' 2012 interview with George Zimmerman.

"I feel like it was all God's plan," Zimmerman said.

We should point out, though, the big difference between Wilson and these examples is he hasn't been officially condemned or even charged with any wrongdoing. Sterling was kicked out of the NBA, Zimmerman was brought to trial and Sandusky was convicted of sex crimes against children and is currently in prison.

The only "mixed reviews" interview that comes to mind is when NSA leaker Edward Snowden sat down with NBC in May, nearly a year after his original leaks to British outlet The Guardian. And that was simply his first interview with an American media outlet.

"All we need to do is to take action, to hold our government to account," Snowden said.

A grand jury is expected to announce this week whether charges will be brought against officer Wilson.