The Law Behind Presidential Records Belonging To The National Archives 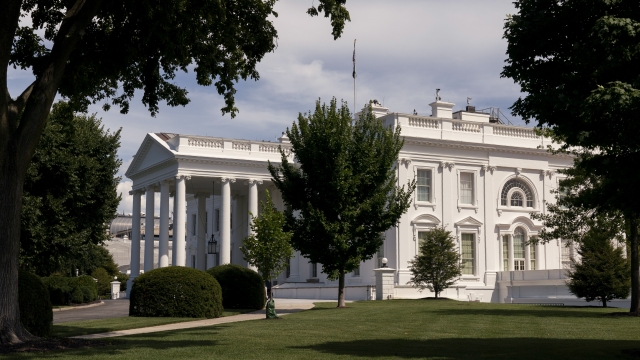 Congress passed the Presidential Records Act after Watergate, preserving documents that otherwise would have been Pres. Nixon's personal property.

Supporters of former President Trump are reacting to an unprecedented move.

"I gotta stand. I don't care if they kill me today," Trump supporter Ben Pollock said.

The FBI executed a search warrant on property belonging to Trump.

"I personally approved the decision to seek a search warrant in this matter," U.S. Attorney General Merrick Garland said.

Unsealed court documents reveal the FBI took 11 sets of classified records from the Trump's Mar-a-Lago home ranging from 'top secret' to 'sensitive compartmented information.' Much of the information would harm U.S. interests if it became public.

The FBI also seized potential presidential records, like the order pardoning Trump's political ally Roger Stone and information about the president of France.

Trump and some of his allies say the documents were "all declassified" before he left office. But some archivists, like Bob Clark, who are "specially trained in preserving original material and helping people obtain it" are raising the red flag on presidential records.

"Regardless of the content of the documents — whether they're classified or not — federal presidential records are the people's property," he said. "Once a president transitions out of office — at the moment that that person is no longer president, they become the legal property of the National Archives and their responsibility."

In fact, the National Archives and Records Administration, which is like the nation's filing cabinet, has been working to obtain Trump's presidential records since he left office in January of 2021.

According to a statement, NARA did receive some of Trump's presidential records that month, including some paper records torn up by the president himself.

A year later, in January 2022, NARA arranged to transport 15 boxes of presidential records from Mar-a-Lago to Washington, with understanding that Trump's representatives would continue looking for any other records to turn over.

Amid all the back and forth Newsy wondered: Why do presidential records belong to National Archives?

For starters, it's the law.

Not all materials make the cut, though.

"It could be, you know, massive quantities of mail from the public, requests for birthday greetings, things like that, that are just so vast in number but have so little informational value that they don't have long term political value," Clark continued. "But prior approval is required to do that."

Clark says Congress' drafting of the Presidential Records Act guaranteed that these records would be accessible to the public for transparency, accountability and historical research.

Before this law came into play, there were no rules on how to manage presidential records. They were actually considered private property.

From President Warren G. Harding's wife claiming to have burned all his records, to President Abraham Lincoln's son, Robert Todd Lincoln, burning all his father's war letters — anything could go, until FDR took a different approach.

"It was Franklin Roosevelt who set the precedent of giving them, deeding them as a gift to the American people to be in the possession and custody of the National Archives," Clark said. "FDR created the Presidential Library."

So why enact the law?

"The reason why the Presidential Records Act was necessary has one very simple explanation: Richard Nixon," Clark continued. "Congress was understandably concerned as a result of their investigations into Watergate because the papers and tapes were technically Nixon's personal property under the way the law was contrived at the time. They were concerned that the papers and tapes would be taken with Nixon, and in fact, Nixon wanted them to go with him to Yorba Linda when he resigned from the office. Congress passed the Presidential Recordings and Materials Preservation Act in 1974, that essentially declared this previously personal property of Richard Nixon's was now federal property. It was just like taking a part of your yard to build a highway ... It was the first time the Congress asserted itself over presidential papers and records like that."

Gerald Ford and Jimmy Carter were the last presidents whose records were their own. Ronald Reagan's were the first Presidential Records Act library records. And Barack Obama's will be the first fully digital presidential library.

"Up to this point, there has always been this kind of delicate dance that happens and it has to be well-timed and well-practiced and ably-executed, like it has always been up to this point," Clark said. "But the point that I would make is that the Presidential Records Act depends on the good will of those involved for the successful execution of it."

That good will has seemingly soured, as what has historically been a run-of-the-mill transfer of records turns into controversy.

"I think that amidst all of the noise over what is where, it's important for the American people to know that this is their property," Clark continued. "Regardless of the content of the documents, whether they're classified or not, presidential records are the people's property. And a former president, who is now a private citizen, has absolutely no right to claim those records as his or her personal property. They're the people's property."