Where Do You Go When You Gotta Go? America's Public Bathroom Shortage 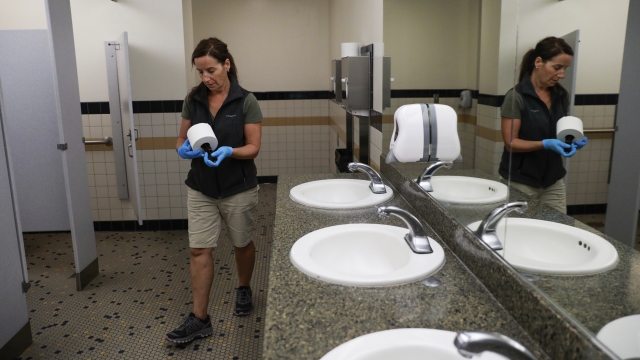 Discrimination, underinvestment and sanitation concerns have led to a lack of public bathrooms, which has multiple consequences.

If a person has to go to the bathroom while out in public, it may be difficult to find a toilet without some sort of catch. Often, it’s in a coffee shop, a convenience store, a pharmacy or in another private building — so it’s not a truly public toilet.

So why is it so hard to find a public toilet in the U.S.?

It’s a question with a complicated answer and that has a long history. Surprisingly, it relates to a ton of different issues, including public health, social services and just about every form of discrimination imaginable.

Public toilets were a fact of life in the U.S. and elsewhere for centuries — at least as far back as the Roman Empire. But they were pretty public, without any walls or barriers between them. The expectation for privacy while going to the bathroom in a public space emerged in the 19th century, with the industrial revolution and houses with modern plumbing.

Later on in the 19th century and into the early decades of the 20th century, sanitation became a greater priority. As leaders began to understand sanitation's role in containing outbreaks of waterborne diseases, cities built and celebrated their public toilets.

Temple University history professor Bryant Simon, who has studied and is writing an upcoming book on the history of toilets, shared more about how toilets used to be a big deal.

Bathrooms quickly became points where people were segregated. Bathrooms were split up by gender, as they still frequently are. But the splits can be broader than that and led to discrimination against many different groups.

For example, public toilets started closing as early as the 1930s, with the LGBTQ community as a target.

In the first half of the 20th century, bathrooms often were segregated by race, with Black Americans, or Latinos in the Southwest, having their own separate facilities.

"The bathroom sort of operates as a kind of hardware of inequality because, essentially, you needed a public bathroom or a bathroom of some sort in order to be out and in public," Simon said.

Racial segregation in toilets may sound like a distant thing or a footnote, but that legacy extends into the present.

In 2018, two Black men were blocked from using the restroom at a Starbucks location in Philadelphia’s Center City. The incident prompted Starbucks to take on a role as America's de facto public toilets, as it changed its policy to allow people to use the restrooms at its more than 15,000 U.S. locations without buying anything.

While money can be a barrier to private toilets in stores, historically it’s limited access to public standalone toilets, too. By the 1960s and '70s, public toilets requiring small payments sprung up, but those ended up closing after concerns about gender discrimination.

The other big push to remove public toilets came in the 1980s, as part of a broader push to drive unhoused people to the edges of cities by taking away their access to public spaces and aggressively enforcing public urination laws.

Now if you don’t have a home of your own, it can put access to a restroom pretty far away.

"Most of us are used to having our own bathroom," said Raven Drake, Street Roots ambassador program manager. "Where I lived when I was unhoused, the nearest bathroom was a one-mile walk away. Imagine walking a mile to the bathroom, and most of us can't fathom walking 50 feet to our bathroom, much less a mile."

Drake works with unhoused people in Portland as part of the local newspaper Street Roots. She’s an advocate for bathroom access as a central part of addressing homelessness, and she was unhoused herself in late 2019 and early 2020, during some of the strictest shutdowns of the COVID-19 pandemic.

"We ran a survey around bathrooms, around the importance of bathrooms and access to clean water with the Joint Office of Homeless Services, and a resounding amount of people answered that they had no access to public restrooms," Drake said. "So we took forth on this initiative of placing throughout the city 172 port-a-potties."

Underinvestment has been a major concern, too. If public toilets aren’t funded or attended, they can fall into disrepair. They can potentially become unsafe or unhygienic.

Starbucks announced in July that it would close 16 stores due to safety concerns. CEO Howard Schultz said in June that the coffee giant may restrict its currently public restrooms to customers only, as part of its broader push for store safety.

So, if Starbucks makes this decision to no longer serve as America’s public restroom, where will people be able to go? Even if a person isn't homeless, bathroom access advocates like American Restroom Association president Steven Soifer point out this is an issue.

Soifer is calling on government officials to step up here, but it may have to be local officials taking the lead.

"There are going to be fewer and fewer options for people to be able to relieve themselves, and that becomes a public health issue as well," Soifer said.

If there are no bathrooms available, the consequences can be deadly for communities. In 2017, at least 16 people died and hundreds more got sick in San Diego in an outbreak of hepatitis A. The disease spread in large part due to contact with fecal matter and public defecation.

The city acknowledged that a lack of public restrooms, especially for unhoused people, was part of the issue and helped contain the outbreak by installing public toilets and handwashing stations.

But even then, a lack of funding or upkeep can quickly lead to toilets disappearing. A report earlier this year from researchers at San Diego State University found many of the toilets closed after the start of the COVID-19 pandemic and that nearly half the county’s census tracts, home to 40% of the population, had no public restrooms.

Other cities are moving ahead with plans to install new public toilet facilities, including Portland, Philadelphia and Washington, D.C. But, there’s still a shortage of public toilets in the U.S. and it’s pretty dire.

In 2011, a United Nations independent expert, Catarina de Albuquerque, studied water and sanitation rights on a mission to the U.S. Her report found an instance in Sacramento, California, where public restroom closures and enforcement of public urination and defecation laws led to a homeless person traveling miles to dump a whole community’s human waste.

In the report, she indicated that the laws had a discriminatory effect and led to "a violation of human rights that may amount to cruel, inhumane or degrading treatment.”