Why The CDC Just Declared A Flu Epidemic 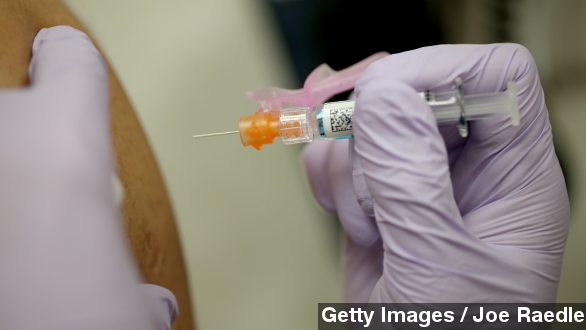 This year's flu strain mutated away from experts' predictions, making the flu shot not as effective. That's not necessarily a reason to not get one.

The CDC says the flu virus crossed into being an epidemic this past week.

Combined with a flu shot that's already been declared not as effective as most years, the agency has warned this flu season could be a severe one.

In its weekly FluView report, the Centers for Disease Control and Prevention said 22 states — mostly in the Midwest and Southeast — reported a high level of influenza activity.

Some other numbers to know; the CDC says the flu is widespread in 36 states, 15 children have died from the flu so far this season and the total number of deaths attributed to the flu hit 6.8 percent this past week. That's the exact percentage where the CDC declares an epidemic.

This year's predominant strain is the H3N2 virus, which caused harsh flu seasons as recently as two years ago. So why aren't we as protected by the flu shot as most years?

"What they're finding is in the predominant virus — at least, early on — it has drifted or become different from what they had predicted," The Washington Post's health blogger Lenny Bernstein said.

"By the time they knew that it had mutated to this extent, it was really too late to change the vaccine," Dr. Roshini Rajapaksa of the NYU Langone Medical Center told Fox News. "They figured this out around March. That's too late for a vaccine that really comes out in October."

You'll be hard-pressed to find a medical professional, however, who says to take this year off when it comes to getting a shot because they say some coverage is better than no coverage. (Video via The Austin Diagnostic Clinic)

The summary of the CDC's weekly report says more states will likely fall into that high activity category soon and rather bluntly advises, "If you have not been vaccinated yet this season, get vaccinated now."

The head of Johns Hopkins' Office of Epidemiology and Infection Prevention pointed out children and the elderly are more susceptible and, if nothing else, she told The Washington Post average adults getting a shot "are in essence protecting those that are vulnerable."