Why The Constitution Leaves Legal Gray Area On Impeachment 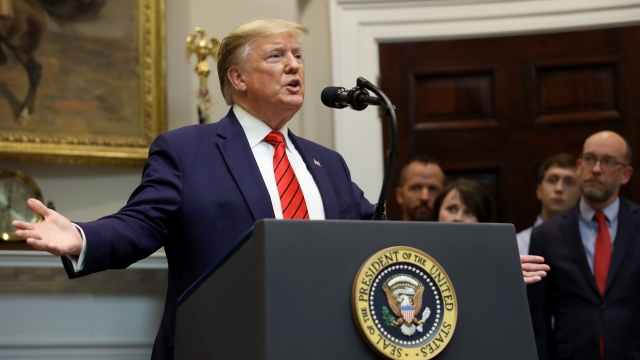 The framers of the Constitution didn't set up the impeachment process like a normal trial.

The Constitution is pretty clear when it comes to the major steps that need to happen to oust a president from office. But how the process should work between those steps is vague.

There are no instructions on how the House conducts an investigation before voting on articles of impeachment, nor are there many rules laying out how the Senate should carry out an impeachment trial.

And because House Democrats have veered from some of the impeachment procedures of the past, President Donald Trump says he wont comply with the inquiry, arguing that the process has been unfairly rigged against him.

But legal experts say the president doesn't get to write the rules.

"The bottom line is the person who's investigated doesn't have the right to tell the investigators how to conduct the investigation," said Louis Michael Seidman, a constitutional law professor at Georgetown University Law Center.

In their letter to House Speaker Nancy Pelosi, White House lawyers argued that House investigators were not following due process because they hadn't held a vote to formally launch the inquiry -- as was the case for both the Nixon and Clinton impeachment efforts. And they are not giving President Trump's legal team access to witnesses and evidence.

But Seidman explained that President Trump, like many Americans is conflating the political process of impeachment with a legal trial.

"The problem a lot of people have is that they think of this as primarily a legal process. So, they think of the way a court runs with elaborate rules and all of that sort of stuff," he said. "The framers thought about giving the impeachment power to judges and they actually decided against it. The reason they decided against it, I think was a more or less conscious decision that this is not primarily a matter of law. It's a matter of statesmanship."

Right now, House Democrats are simply investigating any political wrongdoing by President Trump and what charges they could bring against him in articles of impeachment.

Before voting on articles of impeachment, The House Judiciary Committee will need to hold public hearings. At that point, Republicans will be able to question witnesses and President Trump will be able to defend himself during a trial in the Senate.

But President Trump is still refusing to comply with the investigation, and Seidman says that has triggered a Constitutional crisis, but not the kind of crisis most people think of.

"It's not that specific Constitutional language is necessarily being violated, it's that the kind of norms, customs and practices that have held us together for centuries are beginning to erode," Seidman said.

So what happens next? Seidman says House Democrats could ask a federal judge to hold President Trump in contempt of Congress and force him to comply, like they did when President Nixon refused to hand over tapes of his conversations with White House officials. But that could take months.

It's more likely that House Democrats will call Trump's refusal an obstruction of justice and add that to their list of charges filed in articles of impeachment.