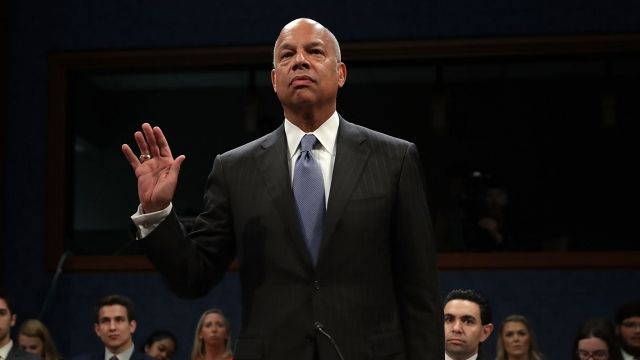 Former Obama official Jeh Johnson gave insight on why the administration waited so long to give details.

"Why did it take the administration so long to make a public statement that a foreign adversary was trying to influence the American election?" Rep. Adam Schiff asked.

Jeh Johnson, the former head of the Department of Homeland Security, testified before the House intelligence committee about Russian interference in the U.S. presidential election. And for once, we seemed to get a clear answer on why the Obama administration didn't give details about the hacks publicly until late last year.

"This was a big decision, and there were a lot of considerations," Johnson said.

Here's the timeline: The government seems to have known at the end of summer 2016 that Russia was trying to influence the election. But there was no public acknowledgment until Oct. 7. One factor: the political blowback.

Part of Comey's answer was that there wasn't really anyone to tell.

"We were concerned that by making the statement, we might in and of itself be challenging the integrity of the election process itself," Johnson said.

And Johnson sort of blames the media for the announcement getting lost in the news. On the same day, the explicit "Access Hollywood" tape of Donald Trump took over the headlines, knocking the Russian news "below the fold," as Johnson put it.

The Obama administration has been criticized, largely by the left, for doing little for several months. But because President Barack Obama vocally backed Hillary Clinton and because Trump said many times he thought the election was "rigged," Johnson says they decided to wait as long as they could before letting Americans know.

"The priority of informing the American public did override all of those other considerations, which is why we did what we did," Johnson said.