Why The U.S. Imports Foreign Oil 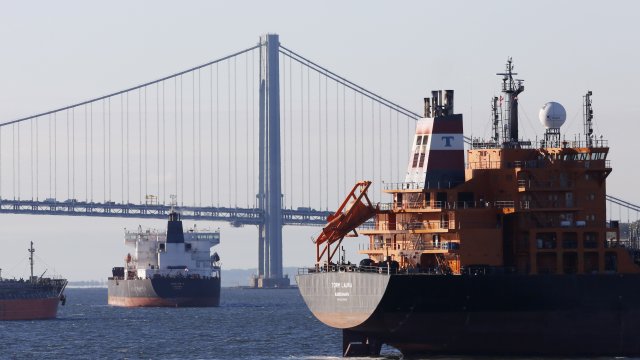 The U.S. is the world’s largest oil consumer. The nation uses more than 19 million barrels of oil a day.

Petroleum, which is found in crude oil, is used to produce transportation fuels, fuel oils for heating and electricity, road oil, and asphalt.

But petroleum products are also used to make synthetic materials, chemical products, and various plastics that are found in many items you have at home.

The U.S. is the world’s largest oil consumer. The nation uses more than 19 million barrels of oil a day.

Data from the U.S. Energy Information Administration shows 65% of oil is produced domestically. The other 35% comes from international partners.

To give you an idea of how much that is - last year, the U.S. Imported more than 8 million barrels (8.47) of petroleum daily from 73 countries.

Our neighbor to the north, Canada, supplied more than half of the U.S.’s imported oil last year.

But America isn’t just a top oil consumer. It’s a key producer, too.

The U.S. took the title of the world’s top crude oil producer in 2018.

The oil industry saw noticeable growth after the great recession in 2008.

American entrepreneurs developed new extraction technologies in hydraulic fracturing, or fracking, that allowed companies to access oil and gas that were previously unreachable.

This helped cut production costs, and  allowed the country to produce more energy and become less dependent on oil from other partners.

According to the Independent Petroleum Association of America, annual U.S. oil production increased 75 percent from 2007 to 2016.

Yet in 2020, nearly three quarters of total production came from just five states.

Texas made up over 40% of the nation’s production.

The war in Ukraine has brought renewed focus on why the U.S. brings in oil from beyond our borders.

For context, Russian oil made up 8% of U.S. oil imports last year. That may not seem high. But imports rose last summer to levels not seen in nearly a decade. Here’s why.

A century-old law, known as the Jones Act, requires all vessels between U.S. ports to be American-made and of a certain size.

Oil buyers on the east and west coast don’t have access to refinery pipeline connections.

So to cut costs on shipping, they turned away from importing from the Gulf of Mexico, and leaned on other countries.

It also comes down to chemistry.

Oil is not consumed directly.  It must be refined in order to make our everyday products.

The viscosity (or thickness) of oil can either be light or heavy.

That largely determines the process needed to refine it into fuel and other products.

Yet, many refineries are not equipped to distill the oil coming from the Gulf Coast.

However that same equipment is capable of processing heavy oil – which is why the U.S. imports heavy oil to make use of the infrastructure.

Companies would need to spend a lot of money to reconfigure their refineries, which is an investment many companies might not be willing to make.