Why Thousands Of Cuban Asylum Seekers Are Stuck In Mexico 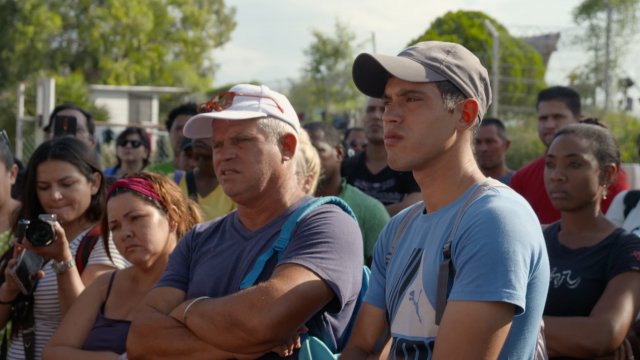 For the first time in 50 years, Cubans no longer receive special treatment at the border. That means the U.S. is keeping thousands of them in Mexico.

"I spent hours in the police station and they hit me in the abdomen and the ribs. They told me they would make me disappear if I continued being outspoken. So I decided I would leave Cuba."

"In Cuba, military service is mandatory. When I joined the military, I remained outspoken about the ruling party. Someone told the higher-ups and they started hitting me. If I go back to Cuba, I’m entering right into prison — a military prison."

Julio and Damian are among thousands of Cubans who have recently fled their country's dictatorship — and are now stuck in Mexico, waiting for their U.S. asylum hearings. For the first time in 50 years, Cuban migrants no longer receive preferential treatment at the U.S. southern border. They now face the same hurdles as everyone else. One of them is the Trump administration's fast-expanding "Remain in Mexico" program. It's forcing more than 50,000 migrants to wait in dangerous Mexican border towns for months until the resolution of their asylum cases.

Cubans are the fourth largest national group of migrants returned to Mexico under that policy — making up 12% of the whole group.

"President Donald Trump is neglecting asylum to us, Cubans, the same way he is to Central Americans."

The U.S. used to automatically admit all Cubans arriving by land — even giving them the opportunity to become legal residents within a year. But President Obama ended the policy known as "Wet Foot, Dry Foot" in the final days of his presidency as part of an effort to normalize relations with Cuba. Cuba had long blamed the policy for encouraging its citizens to flee the island. Now, the Trump administration is undoing Obama's de-escalation efforts with Cuba by adding new economic sanctions against that country. And Cuban migrants in Matamoros, Mexico, told Newsy that the regime is intensifying violence against dissidents — especially those with ties to the U.S.

"The Cuban people aren't able to express themselves. They have to practically be robots."

"We understand that immigration is hard and the U.S. has to do what’s best for their citizens first. But knowing their stance on Cuba I think they should have a different attitude towards us."

Newsy found the approval rate for Cuban asylum seekers was nearly 50% in 2019. That compares with only 18% for asylum seekers from El Salvador, 14% for Guatemala and 13% for Honduras.

"Most importantly: Who caused the persecution? According to U.S. immigration law, it has to be the government or someone that the government cannot control. The majority of Cubans, obviously, can seek asylum based on political opinion."

And that's not lost on a group of American pro-bono lawyers who have been crossing into Matamoros on weekends. They've been holding asylum workshops ever since U.S. officials started returning migrants there in July.

Many Cubans told Newsy they are also confident about their cases because they presented themselves at the border before a new asylum bar was implemented this summer. Under that new policy, migrants — Cubans included — cannot even apply for asylum unless they have already been denied refuge by another country they passed through on their way to the U.S.

"It sucks that they have to go back to Ecuador, where they flew in, or Nicaragua, Panama to start, again, no process that they didn't even feel safe where they were."

Because U.S. asylum policies are increasingly restrictive, the number of Cubans applying for asylum in Mexico, instead, increased nearly 3,000% from 2018 to 2019. That's according to a Newsy analysis of Mexican government data.

"In Cuba, the situation is very, very hard. And I think it is going to get worse every day. If we can't get to the USA, we're going to stay here."

Still, many Cubans told Newsy that Mexico wasn't a safe option for them.

"They kidnap immigrants a lot since they know they have family in the U.S. and they can ask for ransom."

"From the moment you wake up, you can hear bullets fire."

"When Cuba's military chiefs want to eliminate someone, they use an intelligence agency to find that person abroad. Historically, Mexico is a country that has cooperated with Cuba."

The number of Cuban migrants presenting themselves at the Southern border has been rising consistently over the past two years.

But given the new U.S. asylum bar and Mexico's crackdown on its own southern border, future Cuban migrants may find it increasingly difficult to seek asylum in the U.S. — let alone make it to the border.