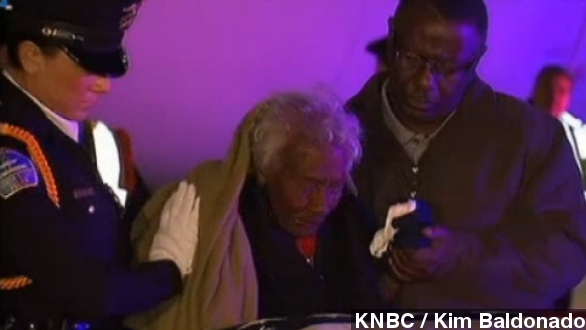 After waiting 63 years, the widow of a WWII and Korean War soldier will finally be able to properly lay him to rest.

A rare story that proves true love really never dies. A California widow waited 63 years for her hero husband to come home from war. And early Friday morning, she wept as his flag-draped casket sat before her.

"Sgt. 1st Class Joseph Gantt served in WWII and then went to fight in the Korean War, where he was taken prisoner by North Korean forces in 1950. He died as a prisoner of war a year later. His family never knew what happened." (Via NBC)

He was presumed dead, but his wife, Clara, who is now 94 years old, never gave up hope. Knowing she'd one day see him again, she made plans for their future together. (Via KMAX)

"I got a gardener, and then I bought a home so when he come home he didn't have to do nothing but go fishing, whatever he wanted to do. And I am in that home now." (Via KNBC)

Over the past decades, Clara has attended dozens of meetings in Washington, D.C. She and other wives and family members of veterans came to be updated about their loved ones. The Los Angeles Times reports: "Her family has told her she's crazy to attend the meetings after so long, but he was her husband, she said. She'd keep going even if she was in a wheelchair."

Although Clara says this isn't the way she wanted her husband back, it's closure. And even after all these years, he was the only man for her.

"He told me if anything happened to him, he wanted me to remarry. And I told him 'No, no.' Here I am, still his wife, and I'm going to remain his wife until the day the Lord calls me home." (Via WFSB)

Joseph Gantt is set to be buried next week. There are still some 7,900 service members unaccounted for from the Korean War.