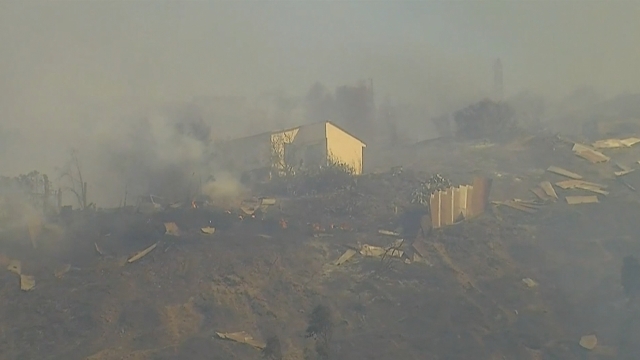 ​At least 150 homes were damaged after a wildfire spread to ​the port city of Valparaíso, Chile.

At least 150 homes have been destroyed after a wildfire spread to a Chilean city.

The fire began on Tuesday in a forested area on the outskirts of the port city of Valparaíso before sweeping through the town due to strong winds. The city's residents have been evacuated and there were no reported casualties. Power was also cut to about 90,000 people in the area as a precautionary measure, and firefighters were working on containing the blaze into Wednesday.

Authorities say evidence so far suggests the fire may have been started deliberately. Chile's interior minister said Wednesday, "If true, this would be very serious," and called on people to "remain vigilant and report any suspicious behavior."

Chilean President Sebastián Piñera tweeted his condolences to those affected, saying, "We deeply regret the fire that affects so many families in the hills of Valparaíso and especially on Christmas Eve."