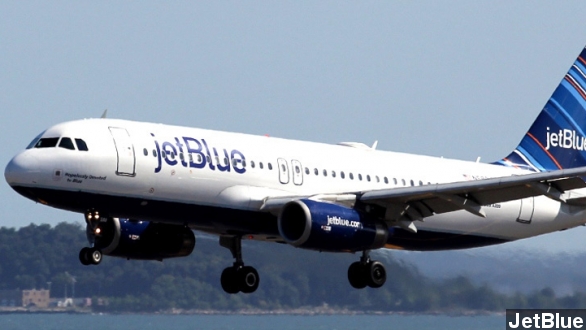 A proposed rule change would allow passengers on U.S. flights to use their phones. But similar proposals have met opposition before.

U.S. airline passengers have been able to keep their cellphones and other gadgets on during liftoff and landing for less than a month, and already there are proposals for even more rule changes.

The Federal Communications Commission announced Thursday it would propose a rule change that would let passengers ditch airplane mode and connect to their cellphone networks while in flight.

"So this is a statement we've gotten from the FCC: 'Modern technologies can deliver mobile services in the air safely and reliably, and the time is right to review our outdated and restrictive rules.' ... Just imagine: people on their cellphones in a flight." (Via CNN)

Well actually, people can imagine that, and according to the airlines, they don't like it.

JetBlue and Delta both say their customers don't like the idea of people gabbing midair, and neither do the most of the commenters on news articles and Twitter. (Via Facebook / Mashable)

A New York Times editor said it would make flights "feel exactly like riding the Megabus, with schmucks chattering on their cell phones," and a Mashable editor called the proposed change the "end of the world as we know it." (Via Twitter / @davidjoachim, @nycjim)

But Mashable also says it's not time to freak out just yet. "The whole process could take months, and even then, every airline will have to install specific technology to allow for the use of cellphones as any rule change would not be mandatory for the airlines."

The proposal will be presented at the Federal Aviation Administration's December meeting. If it moves forward, there will be a public comment period for you to tell the agency what you think of the change.