Will Ferrell Meets His Inspiration For 'Ron Burgundy' 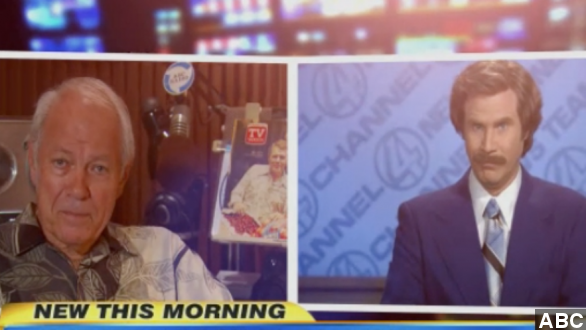 The "Anchorman 2" star's character was inspired by a real-life local news anchor, and they finally met each other at the movie's premiere.

You've been seeing him for months now in everything from Dodge commercials to ESPN ...

"I'm gonna be honest with ya, you look like a succulent baby lamb." (Via ESPN)

But Monday during the premiere for Anchorman 2 in New York, Burgundy finally met the inspiration for America's favorite anchor — (Via Paramount Pictures / "Anchorman 2")

Mort Crim, the former anchor for Detroit news station WDIV-TV. Crim told the Detroit Free Press, "He recognized me. I stuck my hand out and said, ‘Will, it’s nice for you to get to meet me.'"

Sounds about right. Ferrell revealed in a Rolling Stone interview and a New York Times interview in recent weeks that Crim was his inspiration for the "Anchorman" character.

Ferrell told the New York Times he spotted Crim while watching a television documentary about female news anchor Jessica Savitch. "He was struck by a former co-anchor of hers ... 'He literally said the line: ‘You have to remember, back then I was a real male chauvinist pig. I was not nice to her.''"

As you might imagine, since the news broke, Crim has been getting national attention, but it doesn't seem to be bothering him. He also claims the funny movie holds true to real situations.

"I think they've done an excellent job of taking some real situations some real tensions that existed and squeezing the humor out of them."

As for the movie itself, it seems the real gem was the ad campaign which the Washington Post calls, "one of the most massive, ingeniously synergistic movie-promotion campaigns in recent memory" (Via The Washington Post)