Will Millennials Vote To Fix Problems They Blame On Baby Boomers? 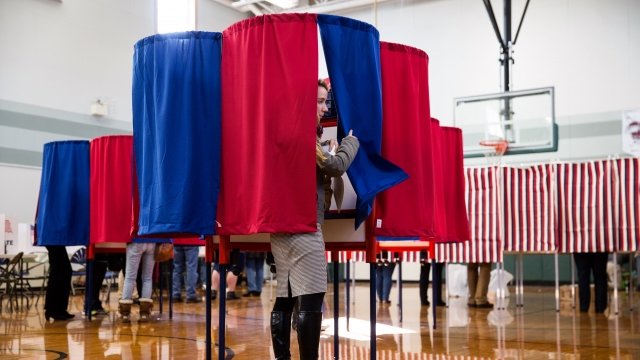 Millennials are blaming baby boomers for making their lives harder, but their voter turnout is expected to fall this year. Why is that?

Millennials and Gen Xers are blaming baby boomers for making their lives harder.

"Normally what happens with these kinds of polls is they blame the generation right before them. In this case, they blame the baby boomers, and the reason why is because you have the two largest blocs, demographically, competing for resources," said Michael Cohen, interim director of the political management program at George Washington University.

The poll is the latest example of how the growing generational divide in the electorate could impact upcoming elections, including the 2018 midterms. Millennials are close to surpassing boomers as the largest group of eligible voters, and that's got politicos vying for their attention.

Among the problems millennials link to baby boomers: the national debt and high college loans. But will millennials actually show up to the polls?

Millennials Are Planning Differently For Retirement

Instead of looking to the end of their careers, millennials are saving for incremental goals. Experts say this could be an issue down the line.

Millennials don't tend to vote as much as older Americans, and it's unclear if that trend will change in November.

A recent study from the Voter Participation Center, a nonpartisan research group dedicated to increasing the participation of minority groups in elections, estimates more than half of millennials who voted in 2016 will not vote in 2018.

Some experts say this is because younger voters have less experience going to the polls and therefore aren't as prepared to vote as older Americans.

"Mainly because voting is a learned behavior. It's like anything else, it's like you get up in the morning and you think, 'I don't feel like getting up in the morning at 6:15 and working out.' You know, it's really hard that first, second, third and fourth time. It's not as hard that fifth time," said Cohen, whose research focuses on political messaging and public opinion.

That could be a problem for Democrats, who saw much more support from younger voters than Republicans did in 2016.

A separate poll from Reuters found that Democrats are losing some momentum with millennials. That survey found support for Democrats over Republicans among young voters dropped by 9 points over the past two years.

So what should politicians do to convince millennials to vote for them in 2018? Cohen says focus on the voters, not President Donald Trump.

"Even though midterm elections tend to be sort of a referenda on the incumbent — and in this case, Trump — it's not going to be enough in some of these races just to do that," he says. "If you're really looking at it from a millennial's standpoint, you need to start talking about their issues straight up instead of just saying, 'Well, they don't like Trump, so they'll be with us.'"