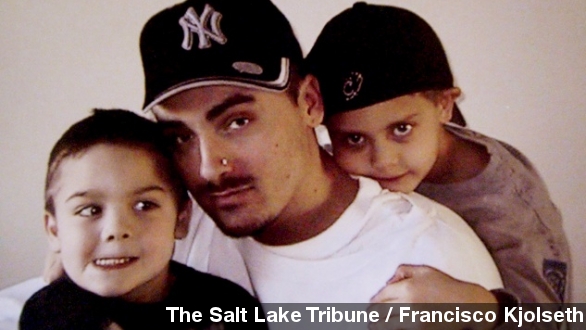 Utah music producer Weldon Angelos is serving a 55-year federal sentence for selling $350 worth of marijuana while possessing a handgun.

A long list of lawmakers from both parties has requested presidential pardon for a Utah man serving a 55-year prison sentence — all because he sold $350 worth of marijuana while possessing a handgun.

A father of two, Weldon Angelos was sentenced in 2004 at the age of 23. He worked as a hip-hop and rap producer and was previously linked to Snoop Dogg. (Via YouTube / Lisa Angelos)

But after making three marijuana sales and carrying a handgun at the time, Angelos was sentenced to a five-year sentence for a first offense, plus 25 years for each subsequent drug sale. Even the judge who gave the sentence called it "unjust, cruel and irrational." (Via The Salt Lake Tribune)

But the judge's hands were tied due to federal mandatory minimum sentencing laws that required such a punishment, even if Angelos had never brandished the weapon during those drug sales.

This week, past and present lawmakers filed a letter asking President Obama to shorten that sentence or deliver a pardon for Angelos. The letter's co-signers include four former governors, 17 former judges and 60 prosecutors. (Via The White House, The Constitution Project)

A number of op-eds from Utah papers and on the national stage have also popped up in support of a shortened sentence. And Angelos' sister has tried to keep the case in the public eye. (Via Forbes)

LISA ANGELOS: "I realize the sentence is just ridiculous, and it doesn't make any sense." (Via KTVX)

And U.S. senators like Pat Leahy, a Vermont Democrat, and Orrin Hatch, a Utah Republican, have said it's cases like these that contribute to mass incarceration in the U.S. (Via YouTube / Senator Patrick Leahy, YouTube / Sen. Orrin Hatch)

The letter submitted this week originated from the nonprofit Constitution Project. That think tank has pointed out a few crimes that would fetch a shorter federal sentence than Angelos' include: hijacking an aircraft, second-degree murder, kidnapping, and sexual assault of a child. (Via PBS)

It's worth noting Angelos did reject a plea deal that would have meant a 15-year sentence, choosing to argue he didn't have a gun during the drug sales. The White House has yet to comment publicly on a possible pardon.