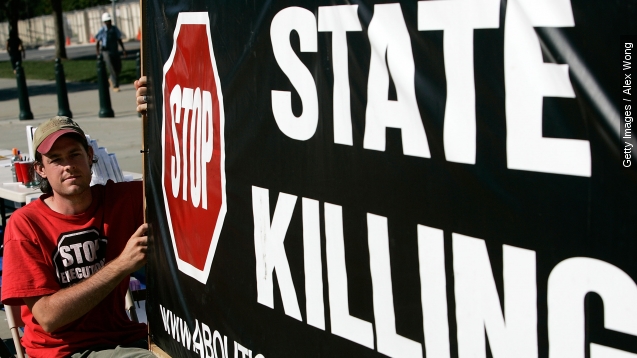 Nebraska's decision to abolish the death penalty raised eyebrows, but could it set a precedent for other firmly Republican states?

Nebraska's decision to abolish the death penalty drew international attention, mainly because the state is firmly controlled by Republicans. (Video via KMTV)

Well technically, the state legislature is nonpartisan, but it's run by registered Republicans, 16 of whom voted to overturn the governor's veto of the bill to abolish capital punishment. (Video via KMTV)

And that raises a couple questions. First, why did they vote against the national party platform; and second, could it happen elsewhere?

Well, we need to answer the first question to answer the second, and to do that, we have to take a look at the Republicans who voted to abolish the death penalty.

Of those 16 senators, six said capital punishment is ineffective as a deterrent and too costly. Five cited religious and moral reasons, such as being pro-life. Three said the system was flawed, leaving the possibility of executing innocent people. And two cited popular opinion, with at least one poll showing a majority of Nebraskans favored alternatives to the death penalty.

While that last poll was commissioned by the American Civil Liberties Union, which opposes the death penalty, national polling by the Pew Research Center showed support is at a 40-year low of 56 percent, and it's been on a downward trend since the 1990s.

And that decline isn't just among Democrats: Republican support has declined by 10 points over the past decade to 77 percent, and 22 points among Independents to 57 percent. (Video via KFOR)

That shows an overwhelming majority of Republicans still favor the death penalty, but the reasons Nebraska Republicans cited for abolishing it aren't local.

Ideals of shrinking government, cutting waste and ideological positions — like being pro-life — carry over nationally, even into the Tea Party movement. (Video via WJLA)

But there are a couple important factors that might set Nebraska apart.

The first of which is that Nebraska's legislature is weird: It's officially nonpartisan, and it only has one chamber. That slightly eases the process of passing legislation by eliminating the divide between a House and a Senate. (Video via NET)

And the second factor is Nebraska didn't carry out many executions to begin with. The state hasn't executed anyone since 1997, and of the 10 inmates it had on death row, one had been there since 1980. There had been an 11th, but he died of cancer last week. (Video via KOLN, WOWT)