Will Peyton Manning's NFL Career End As A Backup Quarterback? 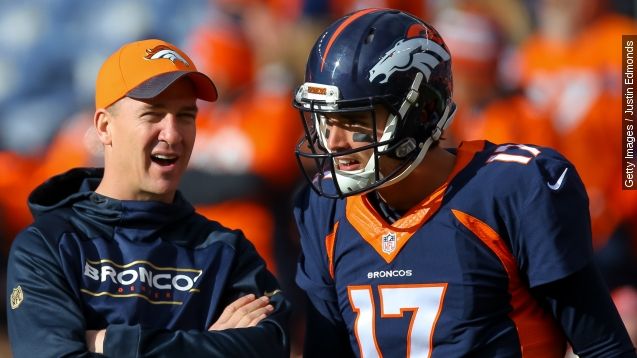 Peyton Manning is seemingly healthy enough to play again, but the Broncos are sticking with Osweiler for at least their final regular season game.

For one of the NFL's best starting quarterbacks for the past two decades, Peyton Manning "the backup" just doesn't sound right.

The Denver Broncos are giving 25-year-old quarterback Brock Osweiler the starting nod on Sunday, which means Manning, a five-time MVP, will serve as a backup for the first time in his career. (Video via CBS Sports)

Manning is returning from a left heel injury that forced him to miss six games, and the Broncos are fighting for a first-round playoff bye on Sunday.

Before Manning's exit, the Broncos were 7-2 with him as a starter this season, although his nine touchdowns to 17 interceptions ratio left a lot to be desired.

And Osweiler has played admirably in his place, posting a 4-2 record with nine touchdowns and four interceptions since replacing Manning. (Video via KMGH)

Even though the Broncos are going with Osweiler over a seemingly healthy Manning on Sunday, that doesn't necessarily mean they'll stick to that in the playoffs.

The question of "will he retire?" has been on the minds of Manning fans for the last few years now, but the 39-year-old has shown no signs of throwing in the towel yet. (Video via Showtime)

NBC Sports' Mike Florio reported as recently as Nov. 22, "[Manning] currently intends, according to the source, to play in 2016 — even if he won't be playing for the Broncos."

Manning is under contract with the Broncos for $19 million next season, but he could seek other starting options if Denver sticks with Osweiler.