Will T-Mobile’s 'Un-carrier 4.0' Reveal Be A Game Changer? 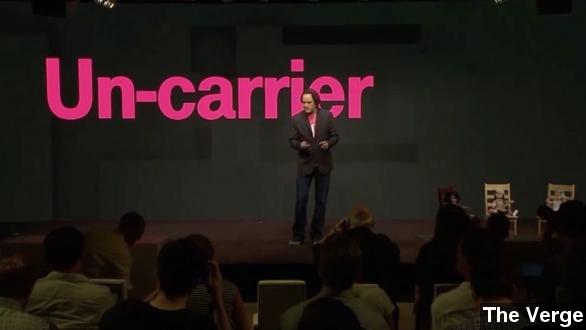 An anonymous source said Friday that T-Mobile is set to announce a new project that could shake things up with competing carriers.

​T-Mobile is looking to shake things up during its upcoming “Un-carrier 4.0” event. But an anonymous leak from a blogger suggests a move from the telecom company that could be devastating to its competitors.

Cam Bunton of TmoNews.com says he was sent an email by a source who claimed that the Un-carrier 4.0 announcement will reveal a project called “Houdini,” a new way for the company to get more customers.

The source says T-Mobile is planning to give new customers up to $350 in credit to cover early termination fees if they leave their current provider. (Via CNET)

Those pain points he’s referring to have been a huge part of T-Mobile’s “Un-carrier” strategy.

The company has jolted other wireless carriers by announcing unlimited data, international roaming, a non-contract plan and customers’ ability to upgrade when they choose.

While the company still doesn’t reign as king of the wireless providers, the announcements have drawn hundreds of thousands to convert. (Via The Verge)

Back in October The Denver Post speculated that the only move left for T-Mobile would be to eliminate switching customers’ early termination fees.

The most promising target in that instance would be families or those in shared plans, considering the high cost of taking multiple users off of a particular plan.

Customers would potentially be able to pay off part of their switching fees by trading in their phones, then T-Mobile would cover the remainder of the cost. (Via Mashable)

But don't get your hopes too high just yet, there's still no concrete evidence to suggest that this will be the big announcement. Legere isn’t expected to hold the Un-carrier 4.0 reveal until early 2014.