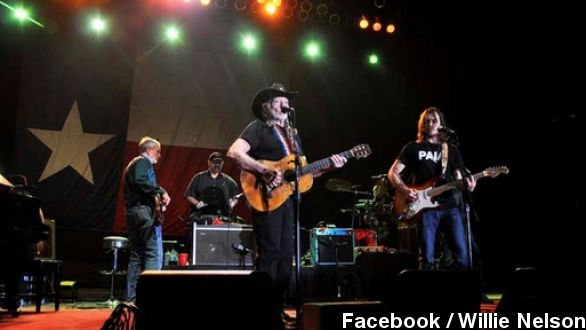 The country singer suspended his tour after a bus crash sent three band members to the hospital. His next confirmed show is Dec. 10 in Las Vegas.

The crash happened on Interstate 30 at 3:30 a.m. Saturday near Sulphur Springs, Texas. (Via WillieNelson.com)

ABC reports the bus was driving through heavy rains and strong winds before crashing into a bridge pillar.

Eighty-year-old Nelson was traveling in another bus at the time of the accident. A Facebook post on Nelson's page says icy conditions might be to blame. As for the injuries, "Paul English injured his ankle, Billy English suffered a bruised hip and crew member Tom Hawkins has a cracked rib."

CNN reports the bus was carrying five band members as well as the driver. Others not hospitalized suffered minor injuries.

The band was scheduled to perform at the Horseshoe Casino in Mississippi Saturday night. However, performances throughout the rest of November will be postponed due to the accident. (Via YouTube / WillieNelsonVEVO)

In response to the crash, Nelson's publicist said, "They'll take a few dates off and then they'll be on the road again." (Via Rolling Stone)

Nelson's next confirmed performances will be in Las Vegas Dec. 10 and Temecula, Calif., Dec. 12.