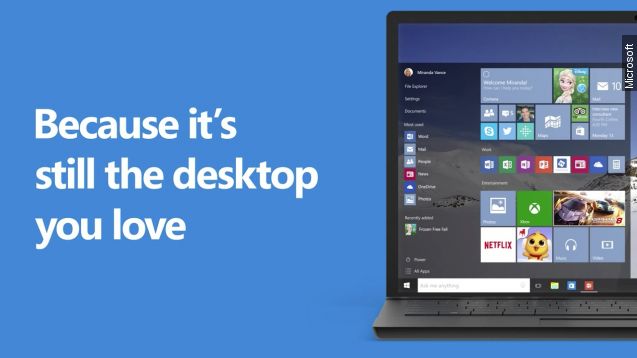 Microsoft announced Windows 10 will be available for download July 29 and the upgrade will be free for people using Windows 7 and Windows 8.1.

"Windows 10 will be available for everyone on July 29," a Windows team member said.

It seems Microsoft, as promised, will be delivering its latest operating system to the masses this summer. Microsoft announced Windows 10 will be available for download July 29, and the upgrade will be free for people using Windows 7 and Windows 8.1.

Customers can download and install the upgrade for free until July 29, 2016. If you're really eager to get the upgrade, you can make a reservation with Microsoft so the upgrade downloads and installs instantaneously on the launch date.

While you're not required to update your operating system, it seems Microsoft would really appreciate it if you did.

According to Computerworld, Microsoft has started a "nag campaign" on some of its older devices that are eligible for an upgrade. Microsoft sends a notification in the task bar that will allow users to reserve a copy of the upgrade.

Windows 10 offers more upgrades than original new features. Chief among them is the resurrection of the "Start," button which was not available for Windows 8.

Also, Siri's sister in computer assistance, Cortana, is back with Windows 10. Microsoft claims the digital secretary is better than ever at learning preferences and providing relevant information.

As for something new, Windows is getting into the facial recognition game and following the "death of the password" trend with its new Windows Hello feature.

According to a Microsoft commercial, "With Windows Hello, the hardware of a new PC can determine that it's you, whether that's using your face or your fingerprint."