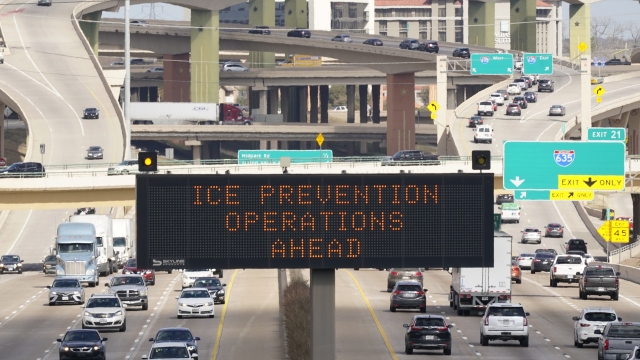 Canceled flights began to mount Tuesday, with St. Louis leading the list with more than 60% of its scheduled departures for Wednesday canceled.

A huge swath of the U.S. braced Tuesday for a major winter storm that was expected to dump heavy snow in the Rockies, ice highways, disrupt travel across the Midwest and plunge temperatures below freezing in Texas.

Airlines had canceled more than 800 flights in the U.S. scheduled for Wednesday, the flight tracking service FlightAware.com showed, including many in St. Louis and Chicago.

The approaching blast of winter weather had many Texas residents on alert nearly a year after a catastrophic freeze that buckled the state's power grid and knocked power out for days, causing hundreds of deaths in one of the worst blackouts in U.S. history. But the forecast this week — which includes freezing rain and potentially snow around Dallas and Fort Worth— does not call for the same prolonged and frigid temperatures like the February 2021 storm.

"No one can guarantee that there won't be any" outages caused by demand on the grid, Texas Gov. Greg Abbott said during a briefing in Austin, where state officials defended their readiness for the days ahead. "But what we will work to achieve, and what we're prepared to achieve is that power is going to stay on across the entire state."

In November, Abbott had, in fact, made a guarantee ahead of winter: "I can guarantee the lights will stay on," he told Austin television station KTBC.

Abbott, whose handling of last year's blackouts is a top line of attack for Democrats as the Republican seeks a third term in 2022, said thousands of miles of roads in Texas will become "extraordinarily dangerous" over the coming days. But he said the state's power grid had enough capacity to handle the expected surge in demand this week once temperatures plummet.

Winter storm watches and warnings covered a wide swath of the country from El Paso, Texas, through the Midwest and parts of the Northeast to Burlington, Vermont. The storm follows a vicious nor'easter that brought blizzard conditions to many parts of the East Coast.

Canceled flights began to mount Tuesday, with St. Louis leading the list with more than 60% of its scheduled departures for Wednesday canceled. Chicago O'Hare International Airport canceled about 90 of its departing flights, and airports in Kansas City and Detroit were also canceling more flights than usual.

During the multiday storm this week, some areas may see a mix of rain and freezing rain before it changes to snow.

"It will be a very messy system and will make travel very difficult," said Marty Rausch, a meteorologist with the National Weather Service in College Park, Maryland.

Illinois lawmakers canceled their three scheduled days of session this week as the central part of the state prepares for heavy snow, ice and high wind gusts in the region.

The National Weather Service said 6 to 12 inches of snow was expected by Thursday morning in parts of the Rockies and Midwest, while heavy ice is likely from Texas through the Ohio Valley.

In Tulsa, Oklahoma, where up to 7 inches of snow and sleet are forecast but little ice, emergency management director Joe Kralicek said the event is not expected to cause large-scale power outages based on an ice index used by the National Weather Service.

"We could see some power outages, however, it's also suggesting that they be limited in scope and nature and very short term in duration," Kralicek said.

Becky Gligo, director of the nonprofit Housing Solutions in Tulsa said teams are working to move homeless people into shelters ahead of overnight lows that are expected to drop into single digits by Friday night.