Winter Weather Hitting Northwest While Other Spots Warm Up 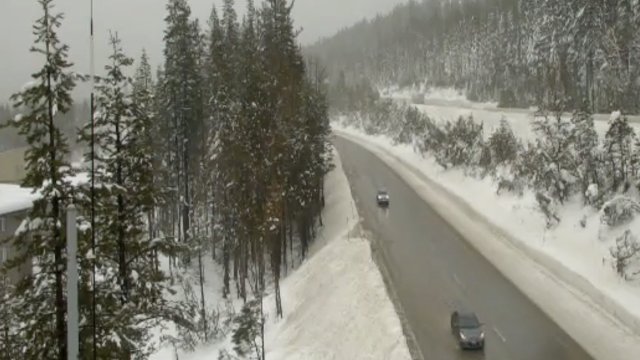 The east coast is getting sleet and snow, while the midwest isn't as freezing.

It's been almost two weeks since a tornado outbreak killed dozens of people and destroyed entire towns in the Midwest.

Newsy meteorologist Scott Withers was in Mayfield, Kentucky right after the tornado ripped through.

Surveillance video from inside an FNB Bank showed the lights going out and the twister busting down the front door and wall.

It shows the strength of the tornado that devastated the entire town, and now the community is starting the long, slow road to recovery.

Though there were no tornadoes predicted on the National Satellite loop, a winter storm is hammering the Pacific Northwest. The Olympia Peninsula is getting some snow, and the Cascade Mountain ski resorts could get up to three feet of snow.

The system is also dumping up to eight feet of snow over the next few days in the Sierra Nevadas, just in time for a ski holiday vacation.

On the east coast, a storm system moved up the Atlantic coast creating sleet, freezing rain and heavy snowfall for New England throughout Wednesday.

The freezing rain covered most of New Hampshire and inland Maine, though Boston was on the warmer side of the storm, getting just rain. Parts of New York City and up into Hartford saw a rainy snow mix.

Along the Wyoming and Nebraska border was a critical wildfire risk, while the whole western U.S. was wet with a snow day.

But one place without any snow is Chicago, which is in the middle of a serious snow drought, now 182 days without measurable snow.

The last time was on March 15, and it's not looking like there will be snow anytime soon. It will be 50 degrees on Christmas Eve, breaking the record of longest stretch of no snow on New Years Eve.