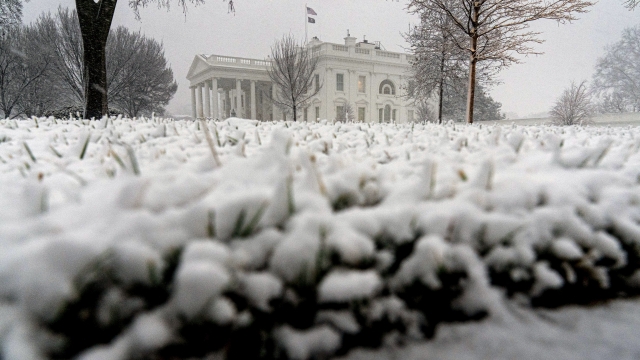 Impacts from the winter storm are expected across the South, Appalachian states, the mid-Atlantic and up the East Coast.

A winter storm packing heavy snow was blowing into the nation's capital on Monday, closing government offices and schools. As much as 10 inches of snow was forecast for the District of Columbia, northern Virginia and central Maryland through the afternoon.

The National Weather Service issued a winter storm warning for the area until 4 p.m. ET Monday. Wind gusts of up to 35 mph were forecast, and travel was expected to be very difficult because of the hazardous conditions, the weather service said.

"The timing of this isn't great," said National Weather Service meteorologist David Roth. "For the D.C. area, it's morning rush hour. At least for places to the northeast, it'll be closer to midday."

The Weather Prediction Center said 2 inches of snow per hour could fall in some areas, and thunder snow was possible. Localized snowfall totals could reach 10 inches.

Snow began falling Sunday night in parts of Alabama, Kentucky and Tennessee. A winter storm warning was also issued in parts of northern Alabama and southern Tennessee, and portions of Georgia, Kentucky, North Carolina and West Virginia. By early Monday, more than 400,000 customers were without power in Tennessee, Georgia, the Carolinas and Virginia.

Impacts from the winter storm were expected across the South, Appalachian states, the mid-Atlantic and up the East Coast.

In Washington, the U.S. Office of Personnel Management announced that federal offices in the area would be closed on Monday. Emergency employees and telework employees were expected to keep working, the OPM said on its website.

Many COVID-19 testing and vaccination sites were closed in Virginia and in Maryland due to the weather.

Multiple school districts in the region said they would be closed, delayed or have virtual learning Monday. D.C. Public Schools said students and staff wouldn't be returning to school until Thursday.