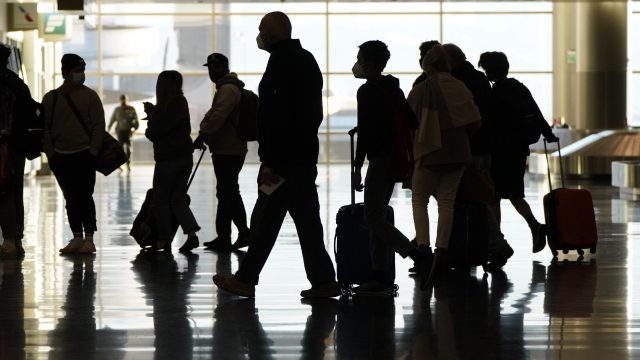 Millions of Americans will hit the road and fill the airports over the next week, but two powerful storms are likely to cause travel problems.

Holiday travel lines are already forming in Oklahoma City as tens of millions of Americans from coast to coast will head out for the Thanksgiving holiday. Tonight, the issues are all in the corners of the country.

A snowy-rainy mix is moving eastward across the Pacific Northwest, blanketing the mountains.

In the Northeast, snow showers in upstate New York stretch to the east across Vermont, New Hampshire and Northern Maine.

Fifty-four million Americans will travel for the Thanksgiving Day holiday, with 90% packing up the car and driving.

"Leave early. If you can leave Wednesday before noon that's great," said AAA spokesperson Andrew Gross. "Or one of the best travel days, and if you're only going kind of a close trip, leave Thanksgiving morning."

A winter storm will form Sunday over the upper plains, moving into the Great Lakes on Monday.

It's going to drop heavy snow in parts of Minnesota, Wisconsin and the Upper Peninsula of Michigan.

The system will send a band of heavy rains to the East Coast, causing flash flooding up and down the I-95 corridor on Monday and Tuesday.

A second storm forming off the New England coast on Monday will hit the region with strong winds and heavy rains, likely causing flight delays and cancellations.

The hardest-hit areas will be from Boston northward, with a foot of snow possible from upstate New York across to New Hampshire.