With Back-To-Back Bombings In Russia, How Safe Is Sochi? 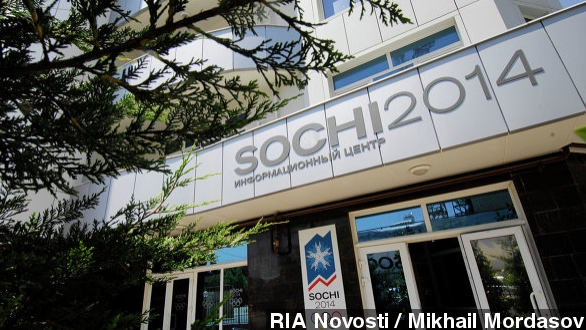 President Vladimir Putin is pulling out all the stops to prevent a terrorist attack during the upcoming Olympic Games. But will it be enough?

Two deadly attacks in less than 24 hours. The back-to-back bombings in Volgograd, Russia, killed more than 30 people and wounded dozens more — shining a spotlight on security in the country just weeks before it hosts the Olympic Games.

The bombings targeted the city’s transportation infrastructure — a railway station and a trolley bus — and the methods used were so similar authorities believe they were planned by the same group. So far, no group has claimed responsibility. (Via CBS, RT)

So will the Olympics in Sochi, set to open February 7, also be a terrorist target? That’s the $50 billion question, as in the record-breaking amount of money the Russian government has poured into the games.

In response to those attacks, the IOC president said in a statement: "I am certain that everything will be done to ensure the security of the athletes and all the participants of the Olympic Games. Sadly terrorism is a global disease but it must never be allowed to triumph."

Terrorism is a lingering problem for Russia. The government has been battling an insurgency in the Chechnya region for decades — an insurgency that has recently become part of the jihadist movement.

Sochi is located about 300 miles from Chechnya and neighboring Dagestan — a stone's throw by Russian standards — and many analysts think that’s by President Vladimir Putin’s design. (Via The New York Times)

A writer for The Independent says: “The Winter Games … have long been his pet project, designed to show the world how complete is his control over the territories of which he is president.”

Another writer for Worldcrunch says: “It is with the Caucasus that Vladimir Putin conquered Russia, using the second Chechen War as a springboard to his election as president in March 2000. He’s now counting on the Sochi games to establish his legacy.”

The train of thought at work here goes like this: Putin pushed to have the Olympics in Sochi, essentially daring nearby terrorist groups to attack. If there are no successful attacks, he will have won, showing the world how security-savy Russia can be.

And as an added bonus, the country could begin a full-fledged push to make Sochi a global tourism hotspot. (Via Bolshoy Sochi)

In July, one of Russia’s most-wanted terrorists pledged to answer the dare, urging followers to stop the games by any means necessary. (Via Pravda.ru)

But so far there have been no attacks in the city. That could be because of the $2 billion the government is spending on security, or maybe the unprecedented crackdown on dissent. Russian authorities have been questioning anyone who expressed even a negative opinion of the games, like environmentalists or human rights activists. (Via CNN, Human Rights Watch)

But a security analyst for CTV reminds us the attacks don't actually have to take place at the Olympics in order to be effective.

"Every time there's a terrorist attack — it doesn't have to be in Sochi, it can be anywhere in the country — it will erode investor confidence, it will ward people off from potentially wanting to travel."

He goes on to say the primary time for terrorists to attack is before the games, potentially scaring away some of the crowds — and perhaps that's what the attacks in Volgograd represent.

In response to those attacks, a spokesperson for The White House National Security Council pledged U.S. support in security preparations, saying "The United States stands in solidarity with the Russian people against terrorism."

Putin has ordered the country's counter-terrorism forces to tighten security nationwide, not just around Sochi.