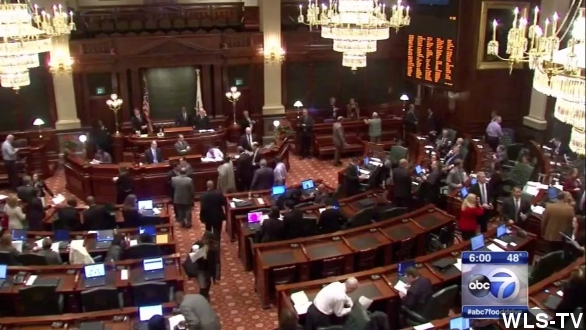 ​The New York Times called it the nation’s most-broken state employee pensions system — and Tuesday, Illinois lawmakers passed a plan meant to fix it, and chip away at a $100 billion pension shortfall. Though the move isn't without controversy.

The bill drew emotional pleas from both sides. Although many Democrats thought it unfair to employees and Republicans said it didn’t trim enough state spending, the plan ultimately won slim bipartisan passage. (Via CLTV)

The bill will mean smaller benefits for state employees. It raises the retirement age — by five years for some — and it cuts cost of living adjustments for retirees. But it also guarantees state contributions to pensions coming on time and lowers the amount employees pay toward pensions. (Via WLS-TV)

Those dents to state worker benefits have upset many labor unions, including that of Illinois’ teachers, who say the legislation is illegal under Illinois’ constitution because it alters pension benefits state workers have been putting money toward for many years.

DAN MONTGOMERY: “We think this is the triumph of politics over the rule of law. And therefore we will be in court after the governor signs this bill.” (Via WLS-TV)

The state’s pension debt has put Democratic Gov. Pat Quinn in an awkward position since he took office in 2009. He made dealing with it a top priority, even as the benefits cuts enraged labor groups typically allied with Democrats. (Via WMAQ)

QUINN: “This is a great day, I think, for the taxpayers of Illinois in that we confronted this very vexing pension challenge.” (Via WBBM)

Those who crafted this legislation say it will erase Illinois’ pension debt by 2044. They’ve also set up an optional 401(K) plan for state workers wishing to leave the pensions system.