WNBA Players Won't Be Fined For Wearing Protest Shirts After All 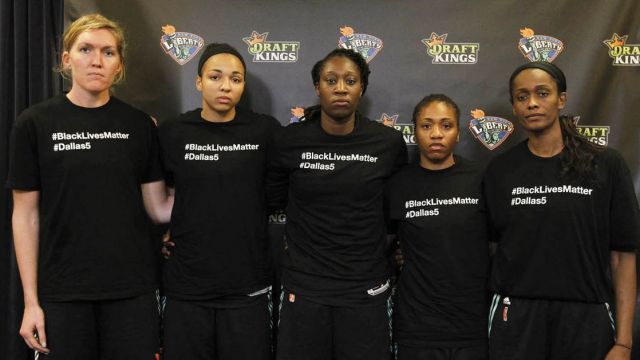 The Indiana Fever, New York Liberty, Phoenix Mercury and their players all faced fines for the all-black warmup shirts.

The WNBA won't be fining a handful of teams and players for wearing black warmup shirts after all.

The Indiana Fever, New York Liberty, Phoenix Mercury and their players all faced fines after they decided to wear warmup shirts to speak out about recent fatal shootings involving Alton Sterling, Philando Castile and the Dallas police officers.

But the WNBA is supposedly having second thoughts.

WNBA President Lisa Borders said in a statement, "While we expect players to comply with league rules and uniform guidelines, we also understand their desire to use their platform to address important societal issues."

Borders continued, saying that since the WNBA is suspending play during the Summer Olympics, the league will use that time to work with the players and the players' union to find a solution going forward.

And the players weren't happy about it — some voicing their opinions on Twitter about the fines, others not voicing anything at all by blacking out the media.

A reporter asked, "Hey, Tamika, so we're not answering any basketball questions today?"

Tamika Catchings of the Indiana Fever responded, "No comment."

Several other teams also joined in on wearing the shirts after the fines were levied.

The WNBA will now go on Olympic break until Friday, Aug. 26.

This video includes a clip from NBC Sports and images from Getty Images. Music provided courtesy of APM Music.