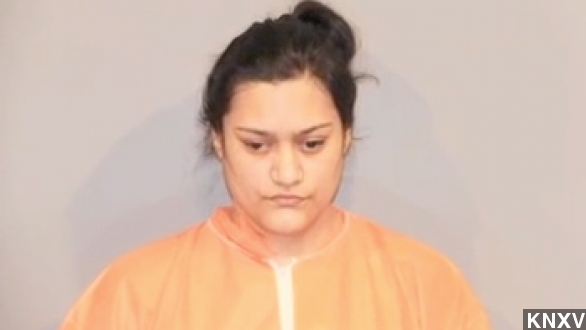 An Arizona woman is facing murder and attempted murder charges after she allegedly poisoned her children and stabbed her husband on Christmas.

​An Arizona woman is in jail after police say she poisoned her children and stabbed her ex-husband on Christmas day. Her 13-year-old daughter Aniarael Macias was found dead in the family’s apartment bathroom.

Thirty-five-year-old Connie Villa of Casa Grande has been charged with first-degree murder, along with four charges of attempted murder. Her ex-husband and three younger children, ages 3, 5, and 8 are in stable condition. (Via KNXV)

“We haven’t determined yet… her motive. She has not admitted anything to us yet, and we are still conducting that interview.” (Via KGUN)

Police told reporters Connie had called her ex-husband to come over to the house. She reportedly stabbed him several times in the torso before he escaped and called authorities while he drove himself to the hospital. (Via KPNX)

None of the children had stab wounds or other injuries but all had traces of opiates in their system. But authorities say they found evidence that Macias was given some kind of prescription narcotic the others didn’t take.

Police say when they arrived on the scene they had to force open the door. Inside the apartment they found Connie holding a knife with her children by her side. She then reportedly stabbed herself several times in the torso. (Via KFDA)

An autopsy conducted on Macias came back without a conclusive toxicology report as to what drugs she may have had in her system. (Via KMSB)

Members of the community and surrounding areas have reached out to the family, who released a statement following Macias’s passing.

“She was a gentle, kind, and beautiful spirit who was taken from us much too soon. Michael and his family are heartbroken. Ania was always smiling.” (Via KTVK)

“We’ve had a huge outpouring of support. We’ve even had people come from Phoenix to help out as well. The whole state of Arizona has done something to help this family.” (Via KEYE)

The children have all been released from the hospital and are currently staying with their father’s family.