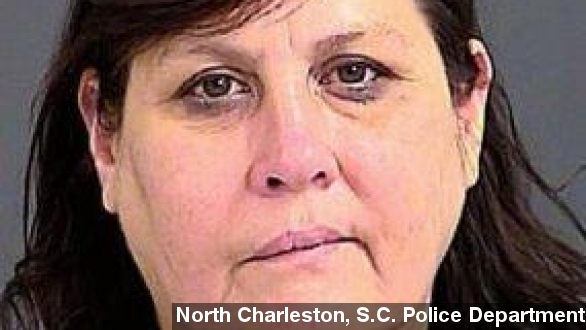 A South Carolina woman was arrested Wednesday for stabbing her husband with a ceramic squirrel after he came home without beer on Christmas Eve.

A South Carolina woman was arrested Wednesday for attacking her husband with a pretty unusual weapon on Christmas morning.

"You are looking at 44-year-old Helen Ann Williams. Police say she hit her husband over the head with a ceramic squirrel, and then stabbed him in the chest with it." (Via KSMB)

The man is now in good condition, though he did suffer injuries from the attack. According to police, Williams' 41-year-old common-law husband went out to buy some beer Tuesday night. But he came home empty handed because the stores were closed. (Via WCBD)

That reportedly made Williams so angry, as soon as her husband wasn't looking, she hit him over the head with the decorative squirrel, then stabbed him with it. (Via Examiner)

According to NBC, the man then ran to a neighbor's house to call for help, and when officers arrived on the scene, they found him covered in blood with a big gash on his chest.

When officers questioned Williams about her husband's wounds, she reportedly told them he had fallen. But her story seemed a little squirrely when police discovered blood on her hands and clothing.

Williams' husband was immediately taken to the hospital, where he was treated for non life-threatening injuries and released. (Via WVTM)

But his wife, on the other hand, didn't get off so easily. Williams was arrested, charged with criminal domestic violence of a high and aggravated nature and given a $10,000 bond.