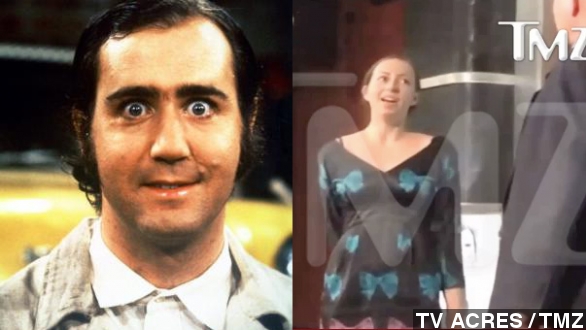 Legendary comedian Andy Kaufman is dead — or is he? A woman claiming to be his daughter says he's alive and well.

A woman claiming to be Andy Kaufman's daughter, and his brother saying he's still alive. Is one of the reported greatest hoaxes ever true?

"He just wanted to be a stay-at-home dad, you know, because that's why he wanted to leave the show biz and whatever. He's pretty much a great dad and raised us." (Via TMZ)

That was at the Andy Kaufman Awards at the Gotham Comedy Club in New York City Monday night — a woman on stage, claiming to be his daughter and saying the great comedian is still alive. The man on stage was Andy's brother, Michael.

It gets weirder. Michael told the crowd that years ago he discovered an essay in which Andy detailed plans to fake his own death. The letter told him to go to a specific restaurant on Christmas Eve in 1999. (Via The Comic's Comic)

He said he did and was given a letter by a mysterious man. The typed letter claimed to be from Andy, detailed how he'd fallen in love and was raising a daughter, and said that more would be revealed once their father died.

He died this summer, and Michael said he then got a call from a woman claiming to be Andy's daughter. On Monday night, he asked the audience if she was there — and that woman stood up. (Via NBC)

Kaufman supposedly died in May 1984 of a rare lung cancer when he was just 35. But legend has it that the master character actor and prankster had plans to fake his own death and escape the limelight. (Via ABC)

The Hollywood Reporter spoke with a producer of the awards and the comedy club's manager, and both said what went down Monday was not a prank, on Michael's end, anyway — that he seemed truly affected.

Kaufman's possibly fake death has been the stuff of legend for years. Some say he was an expert meditator and could have literally lay in a casket and pretended to be dead.

The possibility of a hoax was even addressed in the ending of the 1999 movie "Man on the Moon."

TMZ did some searching after Monday's event and found that an Andy Kaufman was shown to be living in Cook County, Ill., in 2001.

Though in 1999 the website The Smoking Gun said it obtained and published a copy of Kaufman's death certificate filed with the Los Angeles County Department of Health Services.

​The mystery remains. Tweet us at @NewsyVideos and let us know what you think of this latest development: Is Andy Kaufman still alive?