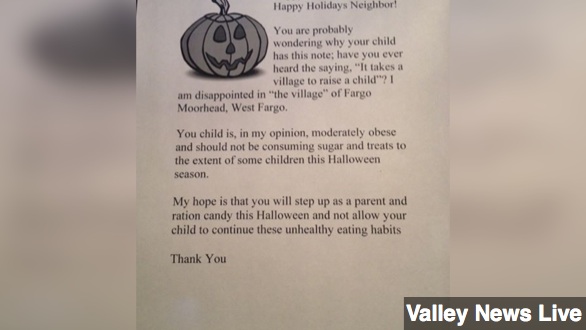 This Halloween, a North Dakota woman says she plans on giving trick-or-treaters she thinks are overweight letters instead of candy.

Trick or treat! Smell my feet! Give potentially obese children a letter to read! … Oh shoot, that’s not how it goes…

“Quote - ‘Your child is, in my opinion, moderately obese and should not be consuming sugar and treats to the extent of some children this halloween season. My hope is that you will step up as a parent and ration candy this halloween…” (Via WTTE)

The woman, who has chosen to be unidentified posted the letter on social media and announced her plan on the radio Tuesday morning. ...and surprise, surprise, it’s not going over too well. (Via KUSA)

“She referenced the saying ‘it takes a village to raise a child’ and says she is disappointed with parents of these children.”“No... It takes a village. Well, I don’t want you in my village, lady.”

“Like that kid is probably not having suffered enough.”

“This is more of an issue that parent’s should be working with their kids on, and I… it seems inappropriate to me.” (Via KVLY)

And doctors and psychologists think this letter might do more harm than good.

“That type of thing that, for some kid, if they’re vulnerable, might trigger major problems. … Dr. Gordon also says it's important to remember that what's obvious doesn't necessarily reflect eating habits.” (Via WEWS)

Time and time again, obesity fighters are finding out that sending children home with “You’re Fat” letters offends more than it helps, all intentions aside. (Via CBS News, WBZ-TV, WFTV)

But those letters, as controversial as they were, were based on measurements and fitness tests — not the eyes of a passerby. And as one Telegram columnist writes, being mean isn’t going to cure childhood obesity.

“Fat shaming — for anyone, kids or adults — is harmful and unproductive. … There may be one set of parents where receiving such a letter could be a wake-up call, and a chance to change the family’s lifestyle habits together. For other families, it might seem more like a ‘blame game,’ as they already know their child has a weight issue.”

The woman says she wants to challenge her entire community to combat childhood obesity. Maybe next year, she’ll skip Halloween altogether or hand out healthier alternatives, like raisins, instead.