Women Are Traveling To New Mexico For Abortions 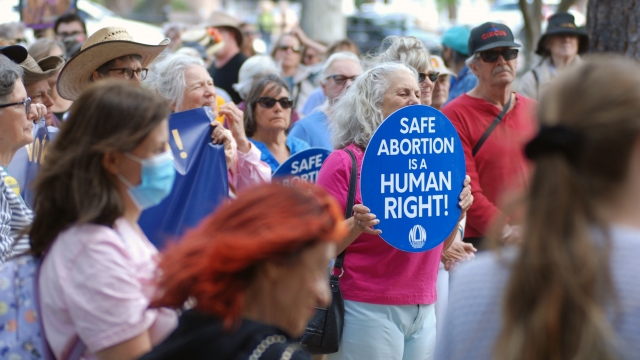 Since the Supreme Court overturned Roe v. Wade, New Mexico is now the only state bordering Texas where abortion is still legal.

It takes more than 12 hours to drive across Texas, a large state where abortion is now unavailable.

T'anna Smith is a Texas resident who traveled to New Mexico by plane.

She flew all the way to El Paso, then crossed the state line into New Mexico to get abortion medication.

Many more women travel by car.

Anti-abortion activists are celebrating a decision they say will save human lives. But in Santa Teresa, New Mexico, at doctor Franz Theard’s Womens Health Clinic, the phones are ringing off the hook for abortion services.

"So we got as little as 100 patients a month, to 269 patients a month. And I think the past two months have been over 200. So I suspect it's going to trend that way," Theard said.

Out-of-towners from the Lone Star State may bring a Texas-sized demand curve for abortion care services, that’s because the population of Texas is more than 29 million people, and the population of New Mexico is around 2 million.

"So there are 55,000 abortion patients in Texas last year and about 11,000 in Colorado, right. And fewer than that in New Mexico. So that's potentially a five times increase in the number of patients traveling from out of state, which is going to have ripple effects across our entire state health care infrastructure. Not only for abortion providers, but for primary care providers," said Jack Teter, vice president of governmental affairs at Planned Parenthood Rocky Mountains.

“It clashes with this sort of cultural conservatism around abortion. But the reality is, is folks are majority working class, and having a child is incredibly expensive. And a lot of folks have different reasons for why they need to seek abortion care, you know, which is a medical procedure. And the government has no business sticking their nose in," said Alexis Bay, a board director at Frontera Fund.

Theard was early on in his medical training when Roe v. Wade legalized abortion nationwide in 1973.

"So it took 50 years for the pendulum to swing the other way. And I hope that it doesn't take 50 years for us to regain reproductive rights," she said.

At the tail end of his career, a constitutional right for women is gone.

"I think some of this is, you got to recognize that the pro-life people have been doing it very gradually over the years. I think the pro-choice people have become have become were complacent. We just took it for granted that it was going to be forever," Bay said.

Theard says he will help people access abortion care as long as he can.

"It is a sad time for the country, and we're going backwards in everything from that to voting rights to everything. What's coming to this country? I don't know," Bay said.

Texas women will likely keep crossing a state line to get abortion care.