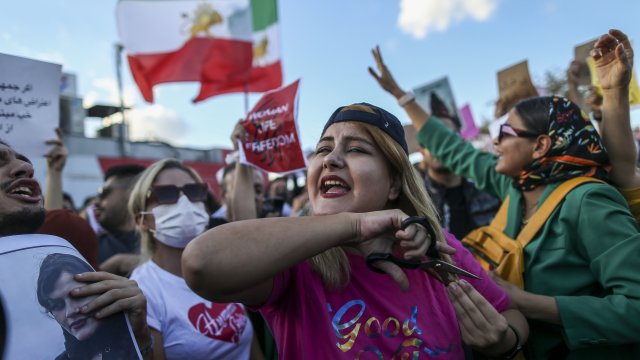 Women are cutting their hair to protest the death of Iranian Mahsa Amini.

In the U.S. and around the world, protests have erupted over the death of Mahsa Amini.

A key symbol has been women courageously removing their headscarves and cutting their hair.

Women from around the world stand in solidarity: in Dallas, Jerusalem, Rome, Chile and France.

The leader sharply condemned the protests over the death of Mahsa Amini as a foreign plot to destabilize Iran, echoing authorities' previous comments.

The 22-year-old Amini died while being detained  by the Iranian Morality Police for wearing the mandatory headscarf incorrectly. Her death became a symbol of dissent.

The Iranian government has responded to the protests with fierce crackdown, and since Amini’s death, the U.S. government has hit the country with more sanctions.