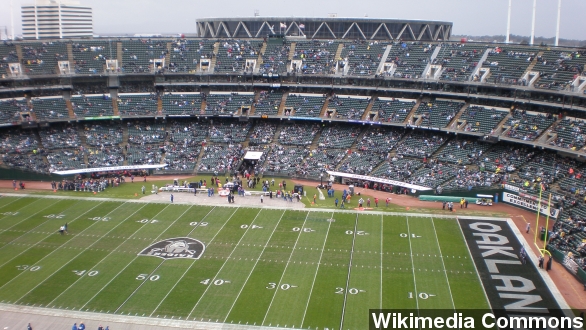 A woman is in critical condition after jumping from the upper deck of the Oakland Raider's football stadium Sunday.

A woman is in critical condition after jumping from the upper deck of the Oakland Raider's football stadium Sunday after the game.

According to local police, it's about a 45-foot drop from where she jumped, and people in the area pleaded with the woman not leap from the edge. (Via KGO-TV)

One of the men pleading with her was a 61-year-old Marine Corps veteran who ultimately saved the woman's life.

"Cops say a good Samaritan, a 61-year-old former Marine was trying to persuade the woman not to jump but she did anyway and he lunged to catch her and was able to break her fall." (Via Fox News)

Sgt. Nelson of the local sheriff's office told San Jose Mercury News, "He saved her life quite honestly, at his own expense ... This guy 100 percent saved her life. She'd be dead now."

According to CNN authorities don't know what prompted the unidentified woman to jump but she reportedly suffered a head injury and is in critical condition.

As for the good samaritan it's being reported that he was also hurt but will recover.