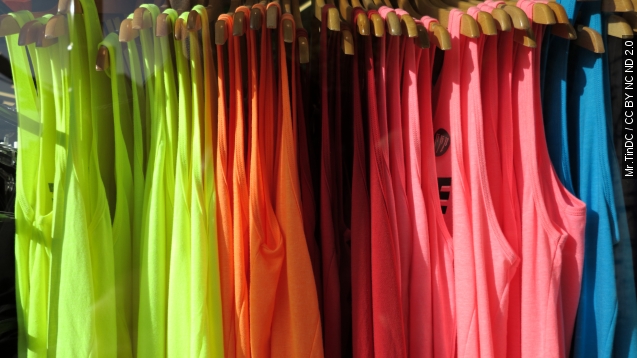 A new survey from a U.K. uniform store found that women spend about five months of their lives deciding what to wear.

Every woman knows that moment when you stand in front of your closet filled with clothes: You audibly sigh and say, "I have nothing to wear."

"What the hell is that?" said Cher's father in the movie "Clueless."

Even if we factored in parents making some teens change their clothes, the decision about what to wear is worse than we thought.

"Researchers found deciding what to wear for work, at weekends and for nights out mean women will spend more than an hour of each week simply considering their outfits."

And more than an hour a week from ages 18 to 65 — that totals 20 weeks, or five months. The reason behind this could be to avoid weird encounters like this:

"You have no style or sense of fashion," said Meryl Streep's character Miranda Priestly.

We're sure Simon Jersey is just tickled with the results — because one way to cut down on that "deciding what to wear to work" category? Obviously, order an outfit from them.

To add to the results in Simon Jersey's favor, 45 percent of women said figuring out what to wear to work was "stressful." The study also found two-thirds of women said wearing a uniform would be less stressful.

But there weren't any results for the guys, something Fox News jokingly promised to bring us next:

"How much time do you spend, Brian? That study coming your way, soon," said Fox News anchor Elisabeth Hasselbeck.

And really — isn't it a bit sexist to omit men? They probably take just as long as we do. Maybe Simon Jersey doesn't have as many male uniforms to sell.

This video includes images from Getty Images and Kompania Piwowarska / CC BY NC ND 2.0 and music from Kevin MacLeod / CC BY 3.0.