The Workaround Some Companies Use To Say They're 'Carbon-Neutral' 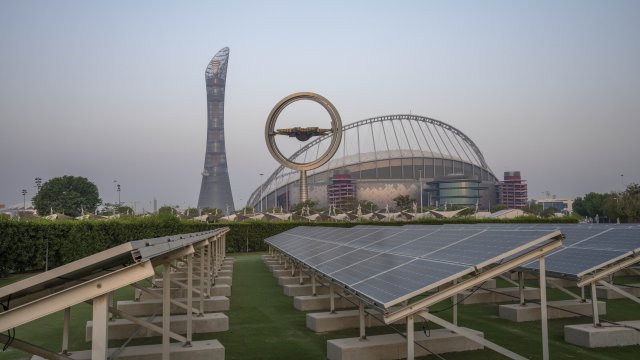 Some companies buy carbon offset projects to achieve carbon-neutral pledges, but it's hard to prove those projects are doing what they claim.

When the 2022 World Cup was first announced in Qatar, it left a number of people scratching their heads — not just because of the surprising choice in the host but also because tournament organizers claimed the games would be carbon-neutral.

When a group is carbon-neutral, it's taking steps to remove an amount of carbon dioxide from the atmosphere that's equivalent to what's being omitted by that group's activities.

While the stadiums themselves may have energy efficient architecture, the emissions from flying in supplies for construction, then flying in all the staff and fans, creates a total emissions cost that's greater than their original estimates. Plus, FIFA's own report suggests it will be even higher than for the Russian World Cup.

Across the globe, from private corporations to state governments, there have been countless pledges to become carbon-neutral or pledges to reach "net zero" on all emissions. Net zero just refers to all harmful emissions, not just carbon dioxide.

After re-joining the Paris Agreement, the U.S. pledged to reach net zero by 2050.

The carbon-neutral idea is a crucial part of climate pledges, but some lofty claims are met with warranted skepticism.

Carbon-neutrality can be achieved by buying "carbon offsets." Those are projects that remove harmful gases in the air — like projects that convert systems to renewable energy or preserve forests that absorb greenhouse gases. But, it's tricky to verify they're doing what they say they're doing — specifically what's known as "additionality." Additionality works like this:

The United Nations Environment Programme says the window is closing on n efforts to keep future warming of the earth at bay.

If a company pays a landowner not to cut down their forests, it can be hard to prove the landowner was going to cut the forest down in the first place. If the trees were always going to be preserved anyway, then that company isn't actually adding anything to the carbon removal process. Thus, they're not truly offsetting the emissions they're creating.

The strategy in Qatar for the World Cup relies on carbon-offsets, though critics point out the organizers are verifying their own offsets.

Last year, the offset market reached almost $1 billion in valuation for the first time. Yet, the market is still largely unregulated across the globe, which opens the door for some questionable claims of "additionality."

A 2020 investigation from Bloomberg found large companies running into the additionality problem: JP Morgan Chase, Disney, and BlackRock each paid different municipalities to preserve forestland in Pennsylvania and New York in deals up to $1 million. In all of these cases, Bloomberg found the land was never threatened in the first place, and the forests were on protected land.

In these cases, the companies were working with a middleman: an organization known as the Nature Conservancy, which recruits land-owners or puts its own properties toward carbon-offset properties. The company insisted their offset projects are validated by third-party auditors, though in 2021, they launched an internal review of its own projects. But, it's not just the Nature Conservancy that's run into trouble.

The Paris-based IEA said CO2 emissions from fossil fuels are on course to rise by almost 1% in 2022 compared to the previous year.

One 2019 investigation found forest preservation projects had overwhelmingly failed to "offset the amount of pollution they were supposed to."

Even in one of the states most friendly to aggressive green policies, studies have shown California's forest carbon-offset program likely overstated its emission reductions by as much as 80%.

It looks equally grim abroad: An EU-commissioned study from 2016 found that 85% of national offset projects were unlikely to have been "additional."

Some experts note that while certain carbon-offsets are not ideal, they might be just a necessary piece of the puzzle in reaching climate goals. But the lack of oversight and regulation in the offsets market leads to big questions about the most effective way to reduce emissions and how to keep polluters from just buying themselves a cover.

It's not all bad, though: Some major organizations are finding industry-wide solutions that could address the problem more directly. For example, the airliner EasyJet recently announced it will no longer use carbon-offsetting but will invest further in developing low-carbon tech for all aviation. Microsoft pivoted in 2020 to only investing in carbon capture technologies, like those used by the company Climeworks. Together with Salesforce, Microsoft pledged $300 million for technology that removes emissions from the air directly; their goal is carbon-negative, not carbon-neutral.

Carbon emissions are not going away anytime soon, and carbon-offsets are a difficult solution to rely on. But finding creative ways to limit emissions at the source, and even remove them entirely, could be a game-changing approach to fighting climate change.