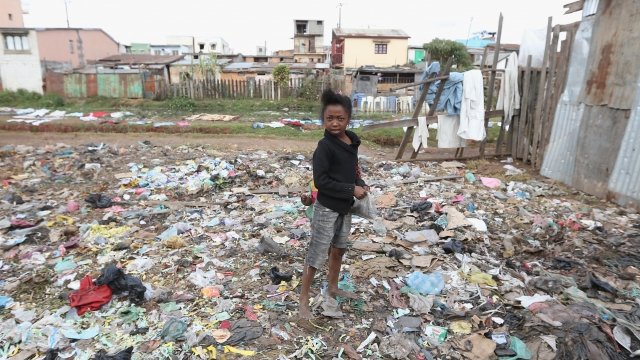 Madagascar typically sees a few hundred cases a year, but officials are mostly reporting cases of a deadlier plague this season.

The organization has sent roughly 1.2 million doses of antibiotics to the island and released $1.5 million in emergency funds to help combat the outbreak.

The small African island isn't a stranger to the plague; a few hundred cases are typically reported every year, mostly between September and April.

This year, though, the country's health minister has already reported 387 cases of the plague and 45 deaths.

Yemen's Cholera Outbreak Is Only Getting Worse

UNICEF and the World Health Organization say Yemen is currently facing the world's worst cholera outbreak, with over 200,000 suspected cases.

That's partially due to the type of plague involved in the outbreak.

The more common — and more commonly known — bubonic plague, which was responsible for the "Black Death" in medieval Europe, is passed to humans from fleas. Fleas pick up the plague-causing bacteria Yersinia pestis from small mammals like rodents.

But health officials are predominantly reporting cases of pneumonic plague, which can be spread from person to person through coughing. This kind of plague is far more deadly. While bubonic plague kills 30 to 60 percent of infected people, pneumonic plague is always fatal without treatment.

Madagascar is also a very poor country, and that's contributed to the outbreak. People living in poor, rural areas come into contact with rodents and their fleas more often. And health care options are few and far between, making it even harder for people to find affordable treatment after becoming infected.

The WHO has appealed for another $5.5 million "to effectively respond to the outbreak and save lives."