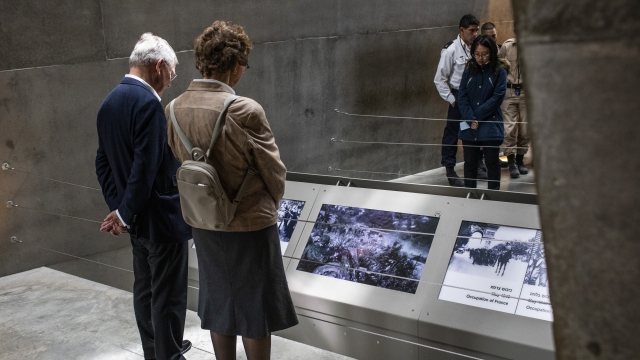 The World Holocaust Forum marks the 75th anniversary of the liberation of Auschwitz.

World leaders have gathered in Jerusalem for the World Holocaust Forum. The event includes a ceremony at the Holocaust remembrance center and meetings to address anti-Semitism. The forum marks the 75th anniversary of the liberation of Auschwitz.

French President Emmanuel Macron, Russian President Vladimir Putin, Vice President Mike Pence and other dignitaries are in attendance at the gathering. It's the largest diplomatic meeting ever held in Israel.

Ukrainian President Volodymyr Zelensky said on Facebook Thursday the Ukrainian delegation would be giving their seats at the ceremony to Holocaust survivors, writing, "Those who deserve it most should attend the main event."

Others are boycotting the gathering. The director of the Auschwitz-Birkenau State Museum has reportedly expressed criticism over the gathering being held in Jerusalem instead of Poland, where the concentration camp memorial site is located.

An estimated 6 million Jews were killed during the Holocaust.