Iceberg Larger Than State Of Rhode Island Splits From Antarctica 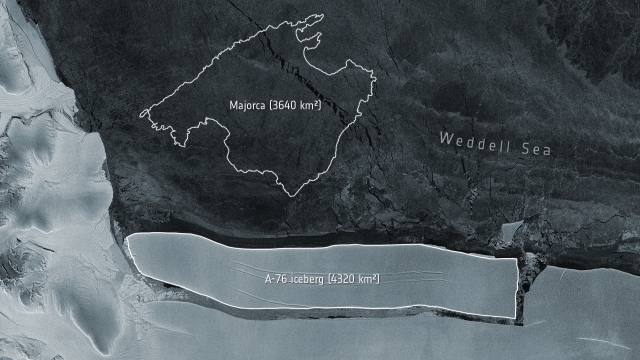 Spotted in satellite images, a slab of ice bigger than Rhode Island has broken off from Antarctica. It's now the world's largest iceberg.

A giant slab of ice has broken off from the Antarctic ice shelf. The European Space Agency said the iceberg is 15 miles wide, and 106 miles long, making it the largest in the world.

Spotted in recent satellite images, the iceberg calved from the Ronne Ice Shelf into the Weddell Sea in Antarctica about a week ago. At nearly 1,700 square miles, it's more than 70 times the size of Manhattan.

The U.S. National Ice Center is now tracking it with help from the Navy and Coast Guard.

Geologists say it does not appear to be linked to climate change, since these events occur naturally. And, they say, because this is part of an ice shelf that was already floating, it won't raise sea levels.

Still, in recent years, scientists have warned global warming could have drastic impact.

The huge chunk of ice is officially known as A-76. Scientists will now track its extremely slow movements.

The collapse, captured by satellite images, marked the first time in human history that the frigid region had an ice shelf collapse.

In 1914, Sir Ernest Shackleton set out on a British expedition to cross Antarctica. But in 1915, the ship got stuck and the crew abandoned it.

Understanding How Antarctica Is Melting

Scientists have found new vulnerabilities that are eroding Thwaites Glacier in Antarctica — which will have significant effects on global sea levels.