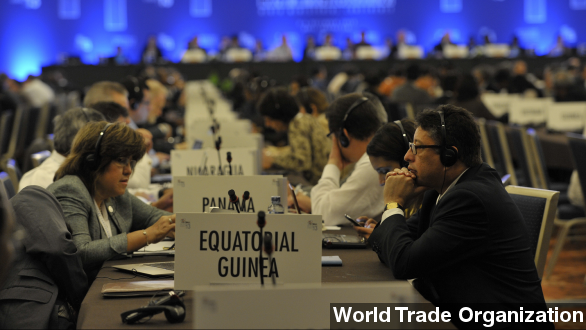 The World Trade Organization came to an agreement for global trade for the first time in the group's nearly 20-year-long history.

At a Saturday meeting in Bali, members of the World Trade Organization agreed to the group's most significant global trade pact in its nearly 20-year history.

The roughly 160 nations in the WTO came to an agreement after some late-night stalling from countries in Central and South America, including Cuba. Those nations were worried about a provision in the trade agreement regarding the U.S. embargo on Cuba. (Via BBC)

Many representatives thought reaching a deal would be nearly impossible. Al Jazeera reports the WTO claims the new plan could create more than 20 million jobs worldwide as it reforms the agriculture industry and simplifies rules for exporting products.

Upon reaching the agreement, the WTO's director general said: "For the first time in our history, the WTO has truly delivered.​" (Via Irish Independent)

But a writer for Forbes says although the deal might be historic, we don't really need it. "The sensible and logical ... trade agreement is unilateral free trade and you just don't need to have an agreement with anyone at all to achieve that."

Either way, supporters of the deal hope it will help create a more level playing field between countries with more money and other countries struggling to make ends meet. (Via WWLP)

The WTO expects the plan to add $1 trillion to the world's economy by creating new jobs and encouraging more trade.