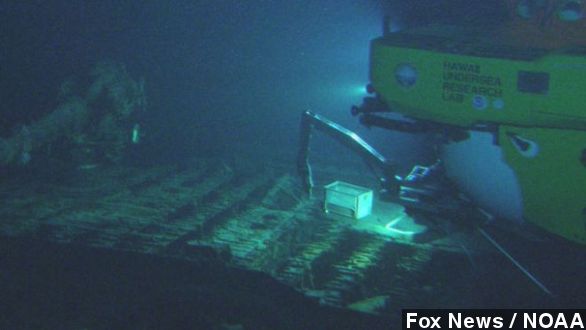 Researchers discovered it in August, but announced it this week.

It’s a Japanese submarine that had reportedly been planning to attack the Panama Canal. The I-400 was scuttled by the U.S. Navy in 1946 in an attempt to prevent the Soviet Union from accessing the advanced technology. (Via WJBK)

“The ‘Sentoku’ class submarine was sitting more than 2,300 feet underwater off the coast of Oahu. It was the largest submarine ever built until the nuclear-powered subs in the '60s.”

So it was, at the time, a pretty impressive piece of work. In fact, it was one of only a handful built. But until now, exactly where it was on the ocean floor was a mystery. (Via KSAZ)

And actually, the I-400 was one of five Japanese submarines the U.S. Navy captured and sunk at the end of World War II. This find means four of those five have now been recovered, and researchers from the University of Hawaii say they won't stop until they find the last one.

“It’s such a unique piece of history. ... That’s the biggest reward for us. Just the closure for families and veterans alike when we make these finds.” (Via KGMB)

The I-400's discovery was only announced this week, but the find was actually made in August.